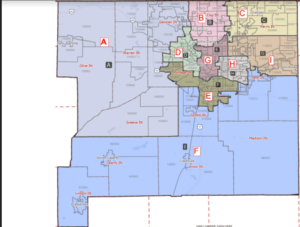 UPDATE: St. Joseph County taxpayers are on the hook for more than $315,000 in fees to two Indianapolis-based law firms hired by county officials during the decennial redrawing of county commissioner and council districts and the litigation that followed, the South Bend Tribune reported.

The fees to Ice Miller and Kroger, Gardis & Regas were calculated in a review of invoices submitted by the law firms. The Democrat-led County Council filed a federal lawsuit against the Republican-led commissioners, saying their redrawn maps gave Republicans a stronger advantage in upcoming elections.

The newspaper noted an invoice from Kroger, Gardis & Regas, which represented the commissioners and includes Republican former Indiana House Speaker Brian Bosma for $102,991.44, and two invoices from Ice Miller, which includes Democrats John Gregg, a former candidate for governor and House speaker, and Kip Tew, a former state party chairman, for $204,920.06 and $9,737.

The legal dispute was settled in early March, leading to the approval of a new set of maps more acceptable to county Democrats.

UPDATE: An Elkhart County judge has approved the settlement of a legal dispute over redistricting in St. Joseph County, clearing the way for a redrawn set of district maps for county commissioner and council districts.

Wednesday’s action in Elkhart Superior Court followed votes to approve the new maps (above) by the St. Joseph County Board of Commissioners and County Council earlier this week.

According to an analysis of the new maps published Thursday in the South Bend Tribune, the new maps appear likely to strengthen Democratic support in one or two council districts as well as one of the commissioners’ districts.

As a result of the changes in the district maps, St. Joseph County has reopened filing for candidates in the May 3 primary, but it will continue only until noon Friday.

EARLIER: In a move that would settle a legal dispute between the Republican-controlled Board of County Commissioners and the Democrat-controlled County Council in St. Joseph County, the commissioners on Tuesday passed a revised set of redistricting maps in a 2-1 vote.

The county council also approved the maps later Tuesday. The agreement also requires approval by an Elkhart Superior Court judge who is overseeing the lawsuit filed by the county council; the suit earlier was moved from St. Joseph County.

The South Bend Tribune reported that “the redrawn maps appeared to make one of the three commissioner districts” — now held by the board’s president, Republican Andy Kostielney — “more competitive for Democrats compared with the original redistricting plan, while making another even stronger for the GOP.”

Through the change in the commissioners’ maps (above, top),  District 1 would add communities on the outskirts of South Bend and remove areas in the southwestern corner of St. Joseph County which are more Republican-friendly. Those districts were shifted to commissioners’ District 3, now held by Republican Deb Fleming.

The revised maps also remove rural and suburban areas from commissioners’ District 2 — also represented by a Republican, Derek Dieter, and centered on the city of South Bend. Under both the original and revised maps, the district was expected to include more Democratic support. Dieter was the only commissioner to vote against the revised maps.

According to the Tribune report, “the new plan’s effect on council seats was not entirely clear … But at least one potential swing district” — held by Democratic incumbent Bobby Kruszynski — “will likely be more favorable for Democrats than it would have been under the commissioners’ original maps.”

The Tribune also reported that the redrawn council district maps (above) will include the residence of Democratic incumbent Diana Hess in the district that she now represents; as previously drawn, the lines had been shifted to leave her residence outside her district.

“I thought the maps we passed were good and clean — cleaner than the maps we agreed to — but the important piece was for us to come together,” Kostielney told the Tribune. “As in any mediation, no side left feeling good about the compromise, but compromise was necessary.”  — The Indiana Citizen