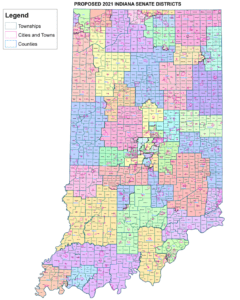 The Indiana Senate Republicans have released their redrawing of the 50 Senate districts, a plan expected to be incorporated into the overall GOP redistricting legislation on which debate is to begin Wednesday.

The maps, described as initial drafts and unveiled Tuesday morning, can be viewed here:

In a news conference at which the maps were unveiled, the author of the enabling legislation, Sen. Eric Koch (R-Bedford) said that similarly to the new Indiana House maps, the new Senate maps are drawn more closely along county lines. According to Koch, the new maps keep 65 of the 92 Indiana counties intact, compared to 49 in the current maps.

In a news release announcing the new maps, Koch added: “We repeatedly heard in our listening tour across the state that the public wants communities of interest kept together, and that is what we have aspired to do as we drew these maps,.With more than 90% of cities, towns and townships kept whole, I believe we have honored that request while navigating the competing interests that inevitably exist when you undertake a project of this magnitude.”

For Bray, the maps followed all federal and state requirements, seeking to keep communities of interest together and make districts more compact.

“Counties, cities, towns and townships are more together than they have been in the past,” Bray said. “With the movement of the population, it left rural areas and moved towards more urban and suburban ones.”

As a result of the redrawn lines, Senate Republicans said eight incumbent senators will be share districts — Frank Mrvan and Lonnie Randolph, both Democrats; Phillip Boots and Brian Buchanan, both Republicans; Democrat Tim Lanane and Republican Mike Gaskill; and Chris Garten and Ron Grooms, both Republicans.

Other changes in Marion County:

A move to unite all of Madison County into one district will pit Lanane, of Anderson, against Gaskill, of Pendleton. It eliminated what Koch called a “Pac-Man” district around Lanane’s district, which connected Anderson and Muncie.

“We heard a lot of testimony that (Madison County) needed to be together, and we were able to achieve that,” Bray said.

The move also creates a new district in Delaware and Randolph counties with no sitting senator.

The new maps, unveiled Tuesday, created an additional Lake County district and pushed two other Lake County Democrats  — Randolph, of East Chicago, and Mrvan, of Hammond — into the same district.

Most of Boone County will now be in one district, meaning Boots, of Crawfordsville, and Buchanan, of Lebanon, will face each other in their next election cycle. The rest of Boots’ former district, which stretched to the Illinois border, becomes a new district with no sitting senator.

In addition, as noted by Dave Bangert in his Substack column Based in Lafayette, Indiana, Tippecanoe County saw a redrawing of district lines that left local Democrats unhappy, with West Lafayette and Lafayette — combined, a potential Democratic-leaning electorate — split into two districts which also include predominantly rural and Republican areas, significantly reducing the Democratic strength in each.

Critics decried the redistricting process, as Senate maps will be amended into the House maps bill Wednesday before any Senate map testimony. The Senate will then consider all three sets of maps, including congressional ones, on Sept. 30.

In a statement emailed to reporters, Indiana Democratic Party chairman Mike Schmuhl said, “Indiana Republicans have once again manipulated our Hoosier democracy in this year’s redistricting period. Over the summer, they held shadow hearings that felt more like a comment box, promised a process that would be ‘fair’ and transparent’, and when it mattered most, manipulated the system once again to favor themselves over Hoosier voters.

“The Republicans’ new Indiana Senate map keeps in place a broken system where self-serving politicians benefit at the expense of Indiana families. These maps were drawn unfairly, without transparency, and are gerrymandered in a way that checks the boxes of the high-priced, Washington, D.C. Republican consultant the Indiana GOP hired to solidify this partisan process.”

The Senate Elections Committee plans a public hearing on the maps at 9 a.m. Monday.

“We have said all along that public input is an important part of the redistricting process,” committee chairman Jon Ford, R-Terre Haute, said in the Republican news release.

“We saw a great turnout from the public during the committee meetings in the House of Representatives last week, and we hope to hear additional feedback Monday in our committee meeting when we discuss our proposed new Senate districts.” — The Indiana Citizen.