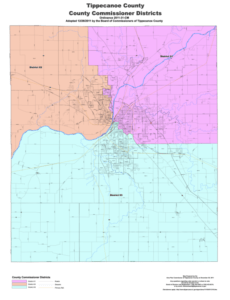 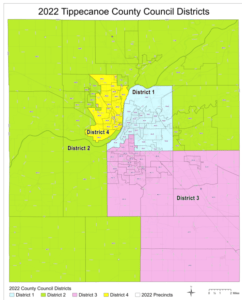 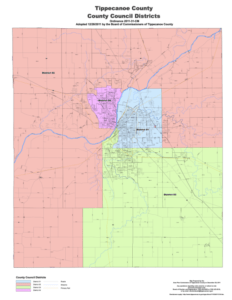 The following reports from contributing writer Dave Bangert were first published in his Substack newsletter, Based in Lafayette, Indiana.

UPDATE: If you were looking for political beef, maybe the caliber of the one that drove the Indiana General Assembly’s redistricting effort this fall, amid the mad scramble to draw political lines for Tippecanoe County government seats, well … you came to the wrong place, I guess.

Rushed into production last week due to a delayed 2020 population counts from the U.S. Census and then late-arriving precinct work from the Indiana Election Division, posted over the long Christmas weekend and then approved by three Republican county commissioners Tuesday morning, even the Democrats looking on could only nod.

The new county districts, in play once a candidate filing period opens Jan. 5 for the May 2022 primaries, had to be done by Dec. 31, according to state law. The boundaries will stay that way for the next 10 years.

“I think they look about right,” Jacque Chosnek, Tippecanoe County Democratic Party chair, said. “I appreciated that (commissioner) Tracy Brown pulled me in as soon as they had some preliminary maps, so we had a chance to give our input. … I think they did a good job.”

Brown also is Tippecanoe County Republican Party chair. He said the maps initially drawn by the Area Plan Commission staff to balance population in each district were sent to county council members elected by districts – two Republicans and two Democrats, at this point – for their takes.

“We were really under the gun on these,” Brown said. “Once I was looking at the proposed maps, I knew it was important to get (Chosnek) to the table, so it was as transparent as we could be, as quick as we had to go. … I guess I value that we live in a community where we can come together like that.”

Ben Murray, a county council member who represents the Lafayette-based District 1, said he appreciated the commissioners asking but that the changes made sense to him.

“What do they call it, the Tippecanoe Way?” Murray said, referring to a phrase used to describe cooperation between the parties in Greater Lafayette. “Seemed like that’s what was going on.”

Other local governmental bodies face their own redistricting deadlines. Lafayette City Council and West Lafayette City Council have their next elections in 2023 and have until the end of 2022 to redraw districts. The first date for candidates to file for school board seats open in 2022 doesn’t come until July 27, 2022. Lafayette School Corp. is on the hook to redraw the lines before that. Tippecanoe School Corp. districts are geographically, mainly based on townships, and have been set that way for decades, County Clerk Julie Roush said. West Lafayette school board will have three seats open in 2022, too, but all school board members are elected at-large, meaning they aren’t tied to specific districts.

Tippecanoe County commissioners on Tuesday will consider a pair of maps that change the boundaries for the three commissioner districts and four county council districts.

It’s part of a once-a-decade redistricting process that follow the results from the 2020 U.S. Census. The idea: The districts need to be shifted and reshaped to balance population gains or losses and so they are “composed of contiguous territory and are reasonably compact.”

The Indiana General Assembly went through redistricting congressional, Indiana House and Indiana Senate districts in fall 2021 – and not without some controversy and accusations that districts were drawn to favor Republicans to shore up their super-majority in the Statehouse.

Those will be in play, starting Jan. 5, when the candidate filing period opens to get on the May 2022 primary ballot in state and county campaigns. In this case, the new lines will matter most for the four county council members who are elected by district and one county commissioner seat – District 1, now represented by Republican Tracy Brown. Those positions will be on the 2022 ballot.

Tippecanoe County’s local maps had been stalled until local precinct numbers were approved by the state, even though they’re due by the end of 2021. The county was waiting for those up until less than two weeks ago, County Clerk Julie Roush said. The Area Plan Commission was assigned to come up with proposed boundaries.

The proposed maps were attached to the commissioners’ Tuesday agenda Friday, heading into the Christmas weekend shutdown. So, exactly how these came together, we’ll learn this week.

For a closer, precinct-by-precinct look at the county district proposal, here’s a link to the ordinance, which breaks that down.

Still to come: Boundaries for Lafayette and West Lafayette city council seats, as well as Lafayette and Tippecanoe school corporation board districts, will be done separately. The city councils don’t have elections scheduled in 2022. The first date to file for school board seats open in 2022 doesn’t come until July 27, 2022. (West Lafayette school board will have three seats open in 2022, too, but those are elected at-large, meaning they aren’t tied to specific districts.)

If you go: The Tippecanoe County commissioners will meet at 10 a.m. Tuesday, Dec. 28, at the County Office Building, 20 N. Third St.

FOR MORE ON REDISTRICTING

Here’s a look at how the redistricting process shook out for local General Assembly districts.

For the full maps: The files below compare the proposed maps to the current ones and the ones from 2001-2011.