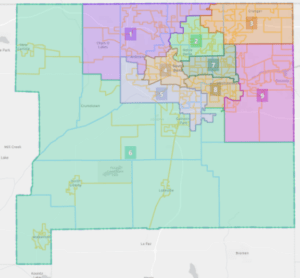 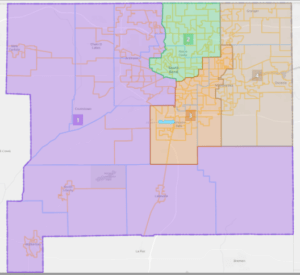 UPDATE: The infighting over St. Joseph County’s redistricting process continued this week as the Republican-controlled Board of County Commissioners vetoed “contingency” maps redrawn by the County Council, only to have the veto overridden by the Democrat-led council.

The actions leave the council district lines unresolved as 2022 primary candidate filing is set to begin in early January, and further set the stage for litigation that has been signalled by council Democrats, the South Bend Tribune reported.

EARLIER: With barely a week left to finalize new district maps, the St. Joseph County Council finds itself sorting through separate proposals from its Republican minority and its Democratic majority, which this week presented three sets of “contingency” maps (above) in anticipation of litigation over the already redrawn county commissioner districts.

The all-Republican commissioners completed their redistricting in November amid charges that the political composition of the new districts would lock in a GOP majority for the coming decade. And because the county’s council districts must be drawn contiguously within commissioner districts — a process known as “nesting” — the commissioners’ redistricting all but ensured a contentious process to follow for the council.

The South Bend Tribune reported that in releasing their three sets of proposed maps this week, council Democrats indicated that they plan to go to either state or federal court to challenge the commissioners’ maps. Each of the three council district maps is drawn to reflect a particular outcome of the litigation, such as the commissioners’ redrawn districts being upheld or rejected by the court.