The following report from contributing writer Dave Bangert was first published in his Substack newsletter, Based in Lafayette, Indiana.

Fountain County Clerk Paula Copenhaver made a statewide name for herself during the 2020 elections when she declined to wear a mask at early polling places in a county deemed a COVID-19 hot spot, despite a pandemic-era mandate from Gov. Eric Holcomb and frustrated pleas from Secretary of State Connie Lawson.

Copenhaver’s stance earned her wide derision and cheers in her home county, just southwest of Tippecanoe County. It also got her thinking about running for a General Assembly seat.

This week, Copenhaver (below), a Covington Republican, announced she plans to run for the state Senate seat in the newly redrawn District 23  (above), which covers half of Tippecanoe County – including all of West Lafayette – and at least parts of five other counties in west-central Indiana.

“I’m seriously concerned for our constitutional rights and concerned by the direction everything is heading as far as our society and as far as elected officials,” Copenhaver said Thursday. “I’ve been praying about it, I’ve been seeking the Lord and dealing with everything that I dealt with last year. I don’t like the bullying, one way or the other. And I am not one of those people that is just going to sit back and complain about it.”

Copenhaver is the first to file in a district drawn with no incumbent state senator in it. She said she would have run for a second term as Fountain County clerk in 2022 if state Sen. Phil Boots, a Crawfordsville Republican, had run for re-election in District 23. But Boots was drawn out of that district and has since said he plans to retire.

There have been rumblings from at least two other people interested in the Republican nomination, but no one has come forward to announce. (Copenhaver said she, too, spoke with two Republicans in the district who told her they likely will run.) The first day to file for the May 2022 primary is Jan. 5, 2022.

Copenhaver, who grew up in Remington and graduated from Tri-County High School, said she’ll campaign as a pro-life, Second Amendment conservative.

She said the mask issue gave her some name recognition – for better or for worse – heading  into a campaign that will cover more than Fountain County and will pick up the bulk of its voters in West Lafayette and western Tippecanoe County.

In October 2020, when tiny Fountain County was among the state’s early hot spots for COVID-19 positivity rates, Copenhaver oversaw early voting at the county courthouse in Covington without a mask. At the time, she fell back on exemptions in Holcomb’s mask order. She consistently declined to say which of the exemptions she fell under, saying that was no one’s business. Copenhaver declined to put on a mask – despite voter complaints, warnings from the county health officer and scolding from Lawson – saying a mandate wasn’t a law. If the General Assembly had passed a mask law, she said she would have followed it. 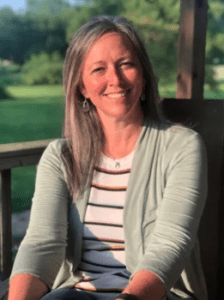