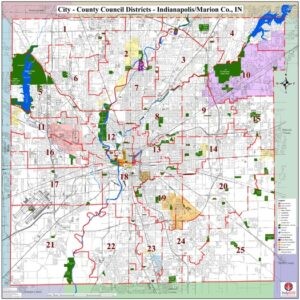 The following report from Indianapolis Recorder writer Tyler Fenwick was first published in the Recorder, and is shared through The Indiana Citizen redistricting reporting project.

The Indianapolis City-County Council voted to approve new local voting districts May 2, bringing an end to the once-per-decade redistricting process that was challenged by some but ultimately didn’t draw much interest.

The new districts will be in effect for the next council and mayoral elections in 2023.

In a statement after the vote, council President Vop Osili, Vice President Zach Adamson and Majority Leader Maggie Lewis touted the map’s bipartisan support. Four of the five Republicans on the council voted in favor of the map.

“The level of bipartisan support received is a direct result of a steadfast commitment to transparency, inclusivity, and equity, with strict adherence to the imperative that we act in the best interests of our community at large and local communities of interest across Indianapolis in our redistricting process,” they said.

The new map is available at indy.gov.

What the new map means for you

You may soon be represented by a different councilor than you’re used to. There are still 25 council seats, but they have to be redrawn every 10 years following the census. One of the rules governing redistricting is districts have to be nearly equal in population.

The new map includes five districts that touch the southern border of Marion County, a reflection of population growth in that part of the county. That is likely good news for council Republicans, whose strength is in the southern districts.

PlanScore, a mapping analysis software, estimates the new map will produce five districts that are considered safely Republican, along with two more that lean Republican.

Some districts could feature two incumbent Democrats running against each other in 2023.

It isn’t yet clear if all four will run for office again, though the districts will almost certainly still produce a Democrat.

How many people really cared?

Evans, one of the no votes, said he voted against the proposal because he wanted the council to give the public more time to comment on the map. That was one of the common complaints from the public and other councilors who were critical of the engagement process.

But even when the public did have opportunities to get involved, many stayed away.

A series of forums meant to get feedback from residents earlier in the year had low turnout, and many of the comments ended up being unrelated to drawing new district boundaries.

There were only about 10 people at a public hearing in April, after council Democrats released their map.