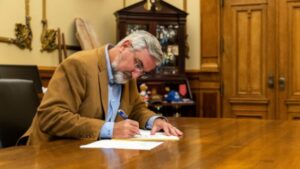 UPDATE: Gov. Eric Holcomb (above) on Monday signed into law House Bill 1581, the Republican-drawn redistricting of the state’s congressional and legislative district lines for the next decade.

“Today I signed HB 1581, completing this once-in-a-decade constitutionally required process,” Holcomb said in a statement released by his office. “I want to thank both the House and Senate for faithfully following through in an orderly and transparent way.

“A special thanks to every Hoosier who participated in the process by sharing their local perspective and input.”

With the signing of the legislation, county governments, school districts and other local governments can begin their redistrictig processing based upon 2020 census data.

EARLIER: Whether you lined up with the critics who called it cynical gerrymandering or the defenders who called it an honest reflection of political reality, one thing was clear by Friday morning about the Indiana Republicans’ redistricting bill.

It had the votes. And despite the reform rallies and crowded hearings of weeks past, not much of an audience.

In a Statehouse uncommonly empty and strikingly quiet for a final session day, House Bill 1581, which redraws the state’s congressional and legislative district lines for the next decade, passed the Indiana Senate along the lopsided party lines that it’s widely expected to maintain, 36-12, with one Republican, Ron Grooms of Jeffersonville, breaking ranks to join the 11 Senate Democrats in voting no.

Two hours later, the Indiana House convened briefly for the concurrence — approved 64-25 with three Republican defections — needed to send the bill to Gov. Eric Holcomb, who is expected to sign it into law.

Introducing the bill to his colleagues one last time, the Senate sponsor, Eric Koch, R-Bedford, told them that it met statutory guidelines as well as “aspirational goals” of following county lines as much as possible and keeping intact more communities of interests, such as cities or school districts, than the current maps.

“The bill before you today,” Koch said, “is the result of a careful collaborative effort and it will serve the state well.”

As before, of the 39 Senate Republicans, he was the only one to speak from the floor, and was followed by each of the 11 Senate Democrats.

Two, J.D. Ford and Senate Minority Leader Greg Taylor, both of Indianapolis, questioned Koch at some length on the attention paid to drawing competitive districts and the map-drawers’ use of outside consultants.

“There were consultants involved,” Koch said, “but not in the drawing of the maps.”

To Ford’s question about the diversity of the map drawers — “Did a person of color participate in drawing the maps?” — Koch stopped short of answering, saying, “I don’t categorize people by their race.”

“If your point is that there was something improper about the maps,” Koch said, “my response is that we had them reviewed for compliance and they passed the review.”

He also pushed back on criticism that the districts had been drawn to protect incumbents and minimize competition. Analyses from PlanScore, a free mapping project from the nonpartisan Campaign Legal Center, show proposed maps would heavily favor Republicans, especially in congressional and Senate races. The efficiency gap, which measures the number of votes each party “wastes” in an election, is 14.4% and 12.1% in favor of Republicans for the congressional and Senate maps, respectively.

“At the end of the day,” Koch countered, “voters make these decisions, and that competition can come in a general election or in a primary … We have political parties. And if there is a political party that has atrophied somewhere that creates a lack of competition, and I say this is bipartisan, we need to reinvigorate our political parties.”

One after the other during most of the session’s 2 1/2-hours, Senate Democrats came to the microphone, many acknowledging the certainty of the maps’ enactment, including Karen Tallian of Portage, who a day before had announced her plans to resign, citing the difficulty of working in so small a minority.

“I think that one party rule is not healthy generally,” she said, “but it can also be dangerous … The non-Republicans in Indiana still make up at least 40 percent of the population and what is happening is that those people are being disenfranchised.  These maps so artfully guarantee it.”

“It doesn’t have to be this way,” Sen. Jean Breaux, D-Indianapolis, said, accusing Republicans of using a process that is “really more about the preservation of power.”

Another first-term Democrat, Fady Qaddoura, said he would continue to pursue legislation to enact an independent redistricting commission to relieve lawmakers of the decennial responsibility, one that reformers call an inherent conflict of interest.

“The fact that we have power,” he said, “that we have titles, does not mean we should be in control.”

In closing remarks before the Senate vote, Koch said he didn’t object to the questions or the criticism.

“I appreciate the vigor of the debate this morning because this is a matter that deserves vigorous debate,” he said. “It is one of the most important things that we do.”

The southern Indiana district represented by Grooms, the lone Senate Republican to oppose the bill, lost enough population that Senate Republicans drew out his district and moved it into central Marion County. Grooms had previously announced his intention to retire, but Jeffersonville Republicans and Democrats both protested the loss of the district.

Democrats in the House briefly revived their attempt to derail the bill before the concurrence vote. Cherrish Pryor of Indianapolis cited Senate Democrats’ criticism of the drawing of districts to “crack” or divide urban communities in Fort Wayne and Evansville, calling it “voter suppression at its fullest … This is not a democracy.”

“The people of Fort Wayne were clear that they did not want to be divided,” she said. “To the credit of the House members, we attempted to resolve that and the Senate did not.”

“It’s not too late to do the right thing,” said Rep. Matt Pierce, D-Bloomington. “It’s not about some minor changes over in the Senate. It’s about what process you want to have for the drawing of the maps.”

The three Republicans who voted no on the concurrence — Jeff Ellington of Bloomington, Matt Hostettler of Patoka and John Jacob of Indianapolis — also voted against the House passage of the bill last week. Ellington and Jacob have publicly protested the political composition of their redrawn districts; Jacob, whose extreme social conservatism frequently has put him at odds with more moderate caucus leadership, was the only one to speak Friday.

Saying he agreed with Democratic charges of gerrymandering — “I want to go on record because I think this is shameful” — he also noted that his own district had been “hacked up.”

General Assembly leaders don’t anticipate returning for technical corrections on the bill, but may do so before the official sine die end date on Nov. 15.

Holcomb has seven days after receiving the bill to sign it into law, or veto it; without his action, it becomes law on the eighth day. Once the bill becomes law, counties can begin their redistricting process for precincts, followed by school board districts. — The Indiana Citizen.

Whitney Downard of CNHI Indiana, Tyler Fenwick of the Indianapolis Recorder and Haley Pritchett of TheStatehouseFile.com contributed reporting through The Indiana Citizen redistricting reporting project, which was organized with assistance from the Hoosier State Press Association.