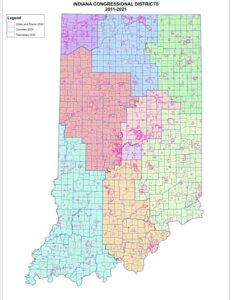 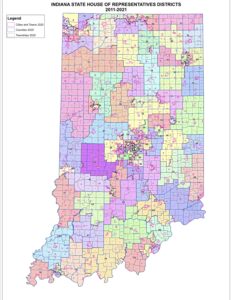 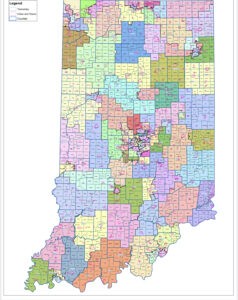 Indiana’s Republican legislative leaders on Tuesday made public most of the redistricting maps that they plan to enact during a legislative process set to begin little more than 24 hours later.

One of the bigger changes on the congressional district map appears to be in the 5th District, which has been redrawn to exclude all of northern Marion County, a change seen as shoring up the Republican vote for first-term incumbent Victoria Spartz. Another change: the 6th Congressional District held by Rep. Greg Pence has been redrawn to more compactly take in counties in east central Indiana; the current 6th meanders further south to the Ohio River.

The 1st Congressional District — also under scrutiny after reports that it might be redrawn to weaken the Democratic vote for first-term incumbent Frank Mrvan — was left largely unchanged.

Generally, the redrawn congressional and legislative districts follow county lines more closely than those currently in effect, one of the changes urged by redistricting reform groups and cited by House Republicans in releasing the maps.

“These proposed maps are the culmination of a months-long effort, which included listening to Hoosiers across the state,” said Rep. Rep. Greg Steuerwald (R-Avon), primary author of the redistricting legislation in a news release.

“We pulled together all the data along with public input to draw fair maps that account for shifts in population over the years.”

Added House Speaker Todd Huston: “For the new House maps, Representative Steuerwald took a holistic approach and worked tremendously hard to keep communities of interest together with a focus on compactness.”

The news release cited the following as improvements over the 2011 maps, also drawn by Republican majorities in the House and the Senate:

Contrary to previous redistricting processes in 2011 and 2001, mapmakers declined to make themselves available for a news conference, only releasing statements and not articulating their decisions made in private. Since Republicans have the supermajority in each chamber, Democrats had no say in the process.

In previous years, mapmakers released information about the number of incumbents in each district and whether any new districts had no sitting representatives.

In legislative districts, changes included the redrawing of districts that resulted in the residences of some incumbent Republicans winding up outside their borders, including Rep. Curt Nisly, R-Milford, a social conservative and consistent thorn in the side of more moderate House Republican leadership. Sharing a redrawn House District 44 are the two-term incumbent, Beau Baird, R-Greencastle, and House Ways and Means Chairman Timothy Brown, R-Crawfordsville, whose residence will fall outside the lines of his redrawn District 41; Brown earlier had indicated that he plans to retire in 2022 and made it official on Tuesday, according to Dave Bangert, author of the Substack column Based in Lafayette, Indiana. In addition, Speaker Huston’s House District 37 was redrawn to include more Republican-friendly northern Hamilton County; its current configuration had resulted in relatively competitive elections for Huston in 2018 and 2020, and would be shared with another Republican incumbent, Rep. Tony Cook, R-Cicero.

One key omission from Tuesday’s public release of the maps was the unavailability of the data in the “Shapefile” format, which is an electronic format that can be used to build districts by combining census data and political precinct data.

“Unfortunately, when we have supermajorities controlling everything, we’re only going to get one option on the table,” said Julia Vaughn, policy director of Common Cause Indiana, the state’s main advocate for redistricting reform in 2021, adding that if  her organization had access to the data in a Shapefile format, it would be much better prepared to do analyses to show how voters and communities could be impacted by the proposed districts.

“Today what we’re dealing with is a complete lack of transparency,” said Vaughn. “You know, this is my third go-round of redistricting. I was there firsthand in 2001 and 2011, and this is the first time I can remember that maps have been released online with no in-person explanation.”

The initial response from House Democrats did not mention the redrawn districts specifically, focusing instead on previous reports that House Republicans hired Washington, D.C.-based attorney Jason Torchinsky, widely known for his court defense of Republican-drawn maps in other states and opposition to independent redistricting initiatives.

“While we don’t know everything about these newly drawn districts, we do know that any map drawn with the assistance of high-priced D.C. consultants, using advanced political and consumer data points, will benefit the Indiana GOP – not Hoosier voters.”

“Indiana Republicans have once again manipulated our Hoosier democracy in this year’s redistricting period,” Schmuhl said. “Over the summer, they held shadow hearings that felt more like a comment box, promised a process that would be ‘fair’ and transparent,’ and when it mattered most, manipulated the system once again to favor themselves over Hoosier voters.

“The Republicans’ new Indiana House and congressional maps keep in place a broken system where self-serving politicians benefit at the expense of Indiana families. These maps were drawn unfairly, without transparency, and are gerrymandered.”

The House Elections and Apportionment Committee will begin receiving public testimony on the new districts in a hearing scheduled for 1 p.m. Wednesday, leaving far less than the two weeks’ notice that redistricting reform groups had urged. A second public hearing is planned for 10 a.m. Thursday, and the committee is set to vote on the congressional and Indiana House district maps on Monday, sending the legislation to the full House, where a final vote is expected on Sept. 23.

The redistricting legislation will then go to the Indiana Senate, which will review the maps with an eye toward wrapping up by Oct. 1.

Vaughn of Common Cause Indiana urged the public to attend this week’s hearings.

“If you’re one of the fortunate people that doesn’t have to work a 9-5, I would encourage you to come to the Statehouse Wednesday or Thursday to the committee hearings and make your voice heard,” she said. “ If you are unable to do that, which is completely understandable, contact your legislators. Tell them you want them to not vote for any maps that weren’t drawn in a transparent manner.” — The Indiana Citizen

Whitney Downard, Statehouse reporter for CNHI Indiana, and Ashlyn Meyers of TheStatehouseFile.com contributed reporting through The Indiana Citizen redistricting reporting project, which was organized with assistance from the Hoosier State Press Association.