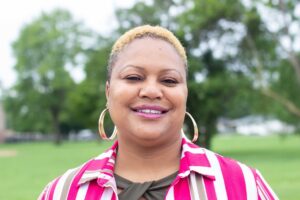 The following column, which first appeared in the Indianapolis Recorder on Sept. 9, 2021, was written by Recorder editor Oseye Boyd. It is reprinted with permission.

Growing up you learn how important voting is. This right to vote in the U.S. is something that makes us special. It’s something citizens in other countries want. Once you turn 18 and are a citizen of this country, it’s your right, no, duty to vote. Your vote matters. Every vote counts. If you want to have a say in how government is run, you vote. If you don’t vote, then you can’t complain because you’re not a participant in the political process.

Well, there’s a whole lot more to it than that, but you don’t learn this until you’re an adult and you become disillusioned with the system. That’s when you realize you’ve been fed an ideal not reality, and the reality is there’s a lot of nonsense that happens with regard to voting.

Gerrymandering is a part of the nonsense.

Redistricting in its purest form is important. It’s how we determine the districts so we can elect those who will represent us on the state and federal level. However, gerrymandering is when one party creates district lines that give them advantage over the other. According to a study from George Washington University, Indiana is 95% more gerrymandered than the rest of the country. Right now, it’s the Republicans who are creating district lines to empower their party and keep it in power, but gerrymandering isn’t exclusive to Republicans. Democrats created gerrymandered districts as well.

Politicians use tactics such as packing and cracking to manipulate districts. No surprise here, but the tactics are often used to dilute the voting power of Black people. Cracking takes a predominately Black area and splits it into multiple districts. Packing is the opposite of cracking. Packing brings people together from the opposing party and allows them to win — a little. So the minority party will win a few seats, but that’s about it. When a racial component is added to packing, it’s called bleaching.

What happened to winning fair and square? Instead, politicians use manipulative tactics to win these seats and gain power. Why not create maps that make sense and create real competition in districts?

I live in one of those weirdly configured districts. I live on the east side of Indianapolis. My senator doesn’t. He actually lives farther east in a different city, or should I say town? While I don’t have an unkind word to say about his representation of my district, we don’t inhabit the same world. I live in a city where the Black population is about 30%. I’m know that’s not the case for my senator. In my youthful naivete, I assumed your representative lived in your neighborhood or at least a similar neighborhood.

Real life eliminated that illusion. Many of Indiana’s legislators are white males from rural areas. Indiana’s diversity continues to grow as now, according to the latest census data, Black residents make up 9.6% of the state’s population, Asians 2.5%, other race 4.3%, those of two or more races 6.4% and Hispanics 8.2%. Wouldn’t it be nice to have a representation more closely aligned to our state? I think so.

Redistricting is about to start. On Sept. 14, House Republicans will show the newly created Indiana House district and congressional maps. By the way, the maps are configured using census data — this is one reason why it’s important to fill out that census form every decade. The process is expected to last through the end of September and into October. The House and the Senate vote on the maps. Both will have an opportunity for public comment.

It is believed gerrymandering plays a role in creating voter apathy and is a form of voter suppression. When you realize your vote doesn’t really matter, you don’t vote. It is designed to depress the votes of certain groups and keep a certain group in power.

These tactics make me want to give up. Then I’m reminded of the ideal — my vote matters. My vote does matter and so does yours or else there wouldn’t be so many concerted efforts to keep us from voting. They’re scared of us. We have more power than we realize. Let’s start using it.