One way of looking at Indiana’s 2011 redistricting is from the perspective of what’s happened since – a decade of Republican supermajorities in the General Assembly and a GOP lock on seven of the state’s nine congressional districts.

But Dan Dumezich (above) sees it in a different light, looking back to what happened 10 years before.

“When I read how Democrats whine about the 2011 maps I have to laugh,’’ says the former Indiana legislator. “When the Democrats drew the maps in 2001 they drew my district so I wouldn’t want to run again.’’

A Republican in heavily Democratic Lake County, Dumezich was appointed in 1999 to an open Indiana House seat representing District 15, which included areas around his home in Schererville where Republican strength was sufficient to elect him to a full term in 2000.

It was his only full term. In 2001, Democrats held the House majority, and passed a redistricting plan that’s been criticized as gerrymandering by observers such as the Cook Political Report, and even by some of their own caucus.

The 2001 redrawing created a more rural and far-flung District 15 (below). While still leaning Republican, it placed Dumezich’s home base on the northern periphery.

Dumezich describes the dimensions of the rest of the district beyond Schererville: “A straight line 80 miles south and then 80 miles east. A giant ‘L,’ in fact.’’

In reporting Dumezich’s plans not to seek reelection in 2002, Times of Northwest Indiana reporter Terry Burns wrote, “The district which once encompassed only southern Lake County was expanded south and east to include Newton and Benton counties, as well as a portion of White County.”

While Dumezich’s was among the most drastically changed, Burns wrote in another story, other redrawn Lake County districts, held by Democrats, appeared likely to remain safe for the incumbents.

In 2002, District 15 elected White County farmer Don Lehe, a Republican who had lost a House bid two years before.  He remains in the House – though no longer representing District 15, which was redrawn in 2011 to center, once again, on Schererville. It’s one of the state’s few competitive districts.

Dumezich returned to his career as an attorney but remained active in politics, including a stint as treasurer of the Indiana Republican Party.

Of his time in the General Assembly, Dumezich, now “happily retired,” says of House Democrats, “Their main objective was protecting the incumbent Lake County Democrats. I didn’t complain.

“Politics is a full contact sport. They should shut up and eat what they served.’’ – The Indiana Citizen 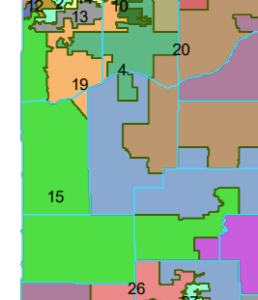