For now, the talk of Indiana is still March Madness and the NCAA tournament, not congressional redistricting. But later this year, Republicans will have the opportunity to redraw the state’s nine seats. And although they’ve dominated statewide elections and have held a comfortable 7-2 lead in the House delegation for the last decade, it’s possible they could attempt to stretch their lead even further.

In 2011, Republicans led by then-Gov. Mitch Daniels passed a relatively compact plan (below, left) that “undid” a gerrymander Democrats had passed in 2001. It packs Democrats into two blue seats – the Northwest Indiana 1st CD and the Indianapolis 7th CD. Since then, however, Democrats’ strength in union-heavy Northwest Indiana has eroded while Republicans’ strength has ebbed in Indianapolis’s white-collar suburbs.

In 2020, GOP state Sen. Victoria Spartz won a hotly contested $20 million race for the suburban Indianapolis 5th CD, 50 percent to 46 percent. At the time Republicans drew the district in 2011, it was safely red territory. But last November, it voted for Donald Trump by just two points and Spartz lost the close-in Indianapolis suburbs of Marion County by 31,000 votes while she won the race by 17,000 votes overall.

Republicans could stop there and call it a day. But with a monopoly on state government, they could also face pressure from DC GOP strategists to get more aggressive and attempt an 8-1 map by targeting Democratic Rep. Frank Mrvan (IN-01).

In a social media-driven age, Mrvan might be one of the most anonymous freshmen in the House. The former mortgage broker, whose father has served in the state senate since 1978, rode endorsements from the United Steelworkers Union and outgoing Rep. Pete Visclosky to win the 2020 Democratic primary over Hammond Mayor Tom McDermott, a longtime Visclosky rival. But Mrvan’s win could be short-lived.

Lake County, which includes Hammond and Gary, is now 20 percent Hispanic and trended towards Trump between 2016 and 2020. The blue-collar 1st CD as a whole voted for Hillary Clinton by 12 points in 2016 but for President Biden by just nine points. It wouldn’t be difficult for Republicans to attach Lake County to deep red rural counties in north central Indiana, converting the 1st CD into a Trump-won seat.

In the hypothetical example (below, right), Trump would have carried the revamped 1st CD narrowly in both 2016 and 2020. But, GOP Rep. Jackie Walorski (IN-02), who won her South Bend-based seat by just under 10 points in 2018, would likely need to agree to take on more of marginal Northwest Indiana (Porter and LaPorte counties) and lose some Trump-heavy rural counties to make an 8-1 plan work.

There’s also no guarantee that a more competitive 1st CD would doom Mrvan. Mrvan won the 2020 general election by 16 points, running several points ahead of Biden – a sign that there is still residual down-ticket strength for Democrats among union voters. It’s also possible Northwest Indiana’s labor groups could peel off just enough GOP allies in the legislature to avert a dramatic makeover. Stay tuned. 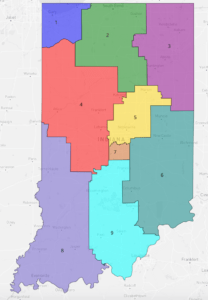 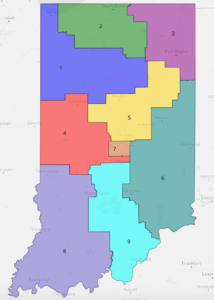