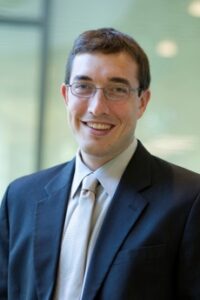 Two days after Indiana House Republicans made public their proposed redrawing of the state’s congressional and legislative districts, a George Washington University professor who performed an often-cited outside analysis of the state’s 2011 redistricting announced his analysis of the new maps: They’re as gerrymandered as the old ones.

The new study by Professor Christopher Warshaw, (above) commissioned by the nonpartisan Women4ChangeIndiana and released Thursday morning, found the maps “have historically extreme levels of partisan bias,” and are roughly equivalent to the 2011 maps, which Warshaw’s previous study found to have “a very large pro-Republican bias” that was among the most extreme in the nation. Warshaw, associate professor of political science at the Washington, D.C., university, has testified as an expert witness in court challenges to redistrictings enacted in other states. He said he was paid $10,000 by Women4Change for the new study.

“Politicians want to win power instead of having to win more votes,” Warshaw said in a news conference announcing his findings. “The advantaged party can win a large majority of the seats with only a bare majority of the votes.”

That’s how the 2011 maps set the stage for a decade of Republican supermajorities, and why the 2021 maps are no different.

“This map is more pro-Republican than 97% of the maps over the past 50 years,” Warshaw said of the redrawn districts made public on Tuesday. “This is one of the most extreme gerrymanders in history.”

He noted how the maps changed the 5th Congressional District to include none of Marion County, a move expected to shore up support for first-term Republican incumbent Victoria Spartz.

“Certainly, no one thinks this is a uniquely Republican phenomenon. Indiana Republicans are doing it today, but could be Democrats tomorrow,” Warshaw said. “Under the new maps, Democrats would basically never win the 5th District.”

Addressing a question about the proposed maps’ effect on the voting power of racial and ethnic minorities, Warshaw said his study did not address those effects specifically, but pointed to the prevalance of “packed” districts in minority communities which historically vote Democratic. “Packing” refers to the practice of consolidating supporters of the party out of power into as few districts as possible, thus keeping the legislators they elect to an absolute minimum.

One way for redistricting maps to strengthen the voting power of minority communities, he said, “is to unpack the Democratic districts. For the state House maps, you could certainly create more competitive districts by unpacking Democratic voters.”

Of the effect on minority representation, he added, “I see no evidence that that was even taken into account. … At the end of the day, that’s going to worsen representation for racial minorities.” — The Indiana Citizen.

Whitney Downard of CNHI Indiana contributed reporting through The Indiana Citizen redistricting reporting project, which was organized with assistance from the Hoosier State Press Association.