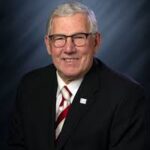 Indiana House District 54 is composed largely of Henry County, home of the New Castle Fieldhouse, once declared the largest high school gym in the world; after a seat count reported by The Indianapolis Star in 2019, that distinction appears to belong to Seymour, Indiana. New Castle also was once home to the largest manufacturing plant in the nation, the Maxwell Automobile Factory, which eventually was sold to Chrysler, New Castle’s major employer through most of the 20th century – another distinction now gone; the plant closed more than a decade ago. The district has been represented since 1996 by Thomas Saunders, a Republican from southern Henry County with a reputation for not always toeing the party line.

Saunders was one of five Republicans in 2012 to vote against leadership-backed right-to-work legislation. Like Saunders, most of the other dissenters represented areas associated with manufacturing and a union population. He was among Republicans to break with leadership to vote in 2014 against House Joint Resolution 3, which would have recognized only those marriages between different genders, and in 2015 against the Religious Freedom Restoration Act, similarly criticized as discriminatory against the LGBT community. Saunders also has shown an independent streak on abortion, breaking with most of his caucus to oppose legislation including a bill in 2016 that would have banned the procedure for reasons that included birth defects.

In 2019, Saunders was the author of legislation which later took on unexpected significance. Passed on party-line votes in both the House and the Senate, the bill moved the deadline to submit an application for an absentee ballot in Indiana from eight days to 12 days before the election. Saunders said he introduced the legislation in response to county clerks who said they needed more time to process the applications. A year later, as the coronavirus pandemic forced a delay in the Indiana primary and a loosening of requirements for absentee voting, the earlier deadline was criticized as compromising efforts to encourage mail-in over in-person voting.

For more than a decade after his election, Saunders’ district was largely rural, skirting the city limits of New Castle to center more on his hometown of Lewisville along the U.S. 40 National Road. The redrawing of its lines after the 2010 census to include historically Democratic precincts of New Castle was seen as a challenge for Saunders to keep his seat, but Democrats haven’t fielded a candidate in the general election since; Saunders easily fended off a primary challenge in 2020. – Kevin Morgan 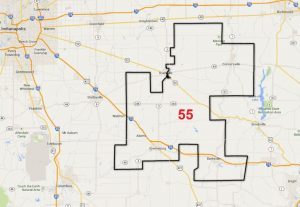