Indiana House District 88 takes in parts of three counties – Marion, Hamilton and Hancock – and a diversity of terrain, extending south from custom homes surrounding Geist Reservoir to farm fields along U.S. 40 near Greenfield. For 34 years, its voters found a familiar name on the ballot, Brian Bosma, who entered politics in 1986 a few years after the death of his father, a state senator, and retired in 2020 as an icon in his own right, the longest-serving speaker of the Indiana House. Though Bosma’s victory margins shrank slightly as the district’s population grew and realigned and his vulnerability increased with scrutiny of his personal life, his successor, it was inevitable that his successor, Chris Jeter, would assume a lower profile, both in the district and at the Statehouse.

Jeter, a Fishers attorney, emerged from a competitive Republican primary as the nominee in 2020. Though he announced his plans to retire in November 2019 and stepped down as speaker in March 2020, Bosma continued as the District 88 representative until resigning in August. Party officials chose Jeter to succeed him. It’s not unusual for Indiana legislators to assume their seats without being elected; about one in five take office by appointment rather than election – and less than three months after his swearing in, Jeter won election in his own right, garnering 59% of the vote against a Democratic opponent. Like more than a few Republican incumbent legislators in 2022, Jeter endured a primary challenger from the right -- in this case, a mother of nine who stressed her opposition to vaccine mandates; Jeter won by nearly 3-to-1 margin.

Although the population centers of District 88 -- southeastern Hamilton and northeastern Marion counties -- became more diverse and less monolithically Republican in recent elections, Jeter has positioned himself to the right of his predecessor, most recently by bucking party leadership to push -- unsuccessfully -- for removing exceptions for rape and incest from the 2022 abortion ban; he eventually supported the bill which included those exceptions on final passage. Also in 2022, Jeter was co-author on a bill to ban transgender females from competing in K-12 sports, and supported the successful override of Gov. Eric Holcomb's veto. -- Kevin Morgan 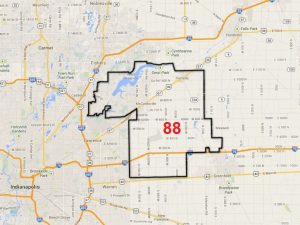