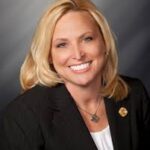 You can’t get any further from the Statehouse than House District 76, which sits at the confluence of the Wabash and Ohio rivers in the very corner of southwestern Indiana; from its most remote, you would drive an hour just to reach Evansville. The district’s representative since 2010, Wendy McNamara, has established a presence in Indianapolis by carving out areas of expertise in education and particularly juvenile justice. A former high school teacher at Evansville Bosse, she is now director of a program which allows its students to earn associate college degrees while still in high school. In 2019, she was appointed to a committee chairmanship usually held by attorneys and is among four women to chair one of the 24 standing committees in the House.

McNamara was the primary author of legislation in 2019 that came largely in response to a national wave of school shootings, including one at a Noblesville middle school that wounded a teacher and a student. Known as the school safety bill, it emerged from a set of recommendations from a legislative study committee and was identified as a priority for the session by Republican legislative leaders. The study committee’s report prominently mentioned mental health as an issue and recommended screening students as a preventative measure – language that ran into opposition from conservative Republicans, particularly in the Senate, who saw an infringement on parental rights. In the session’s final hours, the language was removed from the bill, which passed by an overwhelming margin and was signed into law. McNamara expressed disappointment at the change, as quoted in The Indianapolis Star, “There is no greater need in schools today than someone to help teachers, help our kids with mental health issues and socio-emotional issues. We can put all the locks on the doors, try to harden the target, but with these positive relationships we can often avert tragedy before it starts.’’

In 2016, McNamara was among Republicans to break ranks with leadership to oppose a bill, eventually signed into law, which further limited access to abortions in Indiana, banning them for a variety of reasons including fetal defects. She took the House floor to explain her vote: “I want to make it clear that voting no on this bill does not make me any less pro-life, it makes me a person who’s taking a second to examine a bill that hasn’t been vetted. … I’m prepared to be dubbed as someone that is not pro-life because they will view [my vote] on this bill as something that is not 100% in support of life. I go with a peaceful heart because I know in my heart that I have saved children’s lives.’’ McNamara also has been an advocate of legislation to ban requirements of public notice advertising in newspapers, calling it an outdated practice that drains public budgets and serves as a subsidy to the publishing industry; her bill in 2019 passed the House but stalled in the Senate.

As chair of the its Courts and Criminal Code Committee, McNamara was the driving force in the House for the 2022 abortion ban as sponsor for Senate Bill 1, amending it to add exceptions for serious health complications for the mother and shepherding it past attempts by a majority of her Republican caucus to remove Senate-passed exceptions for rape and incest.

The district was held by Democrats until McNamara’s win in an election that ranks among the state’s closest ever – four votes as determined by a recount. Her winning margins since have been in the thousands except in 2016, when she was unopposed. In 2020, McNamara won 64% of the general election vote in a rematch with her opponent from 2018. – Kevin Morgan 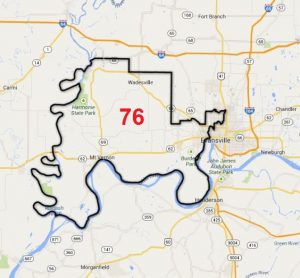