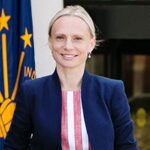 Republican Victoria Spartz won a competitive contest for an upscale suburban open seat, which had been viewed as a prime opportunity for a Democratic pick-up. Spartz, who is believed to be the first Republican woman elected to Congress after having immigrated to the United States, was born in the Ukraine and emphasized her conservative economic views. She succeeded Republican Susan Brooks, an influential lawmaker who retired after four terms.

Spartz received her bachelor and master’s in business administration degrees from the National University of Economics in Kiev. Even before she left her homeland, Spartz had been critical of economic life in the former Soviet Union. As a college student, she met her husband, Jason, on a train in Europe; eventually, she agreed to marry him and return to his native Indiana. “I felt this is just a country of such wonderful opportunities and freedom,” she told The Indianapolis Star.

In the United States, Spartz learned that her academic degrees had little professional value. She became a bank teller and got a master’s in professional accounting from Indiana University. Spartz worked as a certified public accountant, became active in her husband’s family business of real estate investment and development, and started her own financial firms. She served as chief financial officer for the state attorney general and was active politically as president of Hamilton County Republican Women.

In her initial campaign, Spartz ran successfully in a special election in 2017 for a seat in the state Senate. She won the nomination by defeating the candidate backed by her Senate predecessor. In the legislature, she described herself as “a limited government conservative” and worked on initiatives to reduce regulation.

Following the shooting of a teacher and a student at a local school, Spartz sparked controversy, The Star reported, when she opposed legislation to make it more difficult for individuals who had committed a violent crime as a juvenile to obtain a gun license. Her congressional bid was endorsed by the National Rifle Association.

The surprising decision to retire by Brooks, who headed campaign recruitment by House Republicans, led to a wide-open contest to succeed her, with 15 candidates in the Republican primary. Other leading contenders included Beth Henderson, who owned an adult learning firm, and Micah Beckwith, a pastor and small businessman.

Largely with self-financing, Spartz outspent her opponents. The Club for Growth, a political action committee of economic conservatives, backed her. Spartz won the primary with ease, getting 40 percent of the vote to 18 percent for Henderson and 13 percent for Beckwith. She had big leads in Hamilton and Marion counties, the chief population centers.

Democratic nominee Christina Hale, who was executive director of Kiwanis International, had served four years in the state House. She ran in 2016 for lieutenant governor on the Democratic ticket with John Gregg, who narrowly lost to Republican Eric Holcomb. In her bid for Congress, she won the Democratic primary with 41 percent of the vote against four opponents.

The House Democrats’ success in 2018 in winning suburban districts led them to list the Indianapolis-area seat as one of their prime targets, even with its long history as a Republican bastion. Spartz’s overseas background became a factor late in the campaign. The Congressional Leadership Fund, an arm of House GOP leaders, criticized Hale for “shameful anti-immigrant attacks” with Democratic ads that highlighted Spartz’s prominent accent. Democrats responded that Spartz typically did not speak in her ads. Spartz defeated Hale, 50%-46%.

Hale won Marion County, with 63 percent of the vote. Spartz comfortably led elsewhere in the district, including 54 percent in Hamilton County, which cast nearly half of the total vote.

Spartz got seats on the Education and Labor, and Judiciary committees. During her first week in the House, she bucked a majority of House Republicans when she voted to certify the Electoral College results.

As the only Ukrainian-born member ever to serve in the House, her profile rose after Russia’s 2022 invasion of its former republic, which Spartz called "a genocide of the Ukrainian people by a crazy man;" she was among the first U.S. officials to refer to Russia’s actions as war crimes and twice traveled to Ukraine, where she criticized the speed and effectiveness of international humanitarian efforts. But she also has been critical of Ukraine’s actions since the invasion, accusing president Volodymyr Zelenskyy of "playing politics and theater" rather than effectively leading his nation. In July 2022, she urged President Biden to order an investigation of Ukrainian official Andrii Yermak, saying his actions were damaging the war effort; her calls met with little support.

Also in 2022, Spartz drew national attention after a Politico article called attention to her topping a list of the “worst bosses’’ in Congress, citing high staff turnover and complaints of a toxic work environment in her office. Spartz responded that “I work extremely hard at a pace that is not for everyone.’’– The Almanac of American Politics 2022 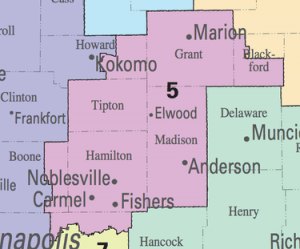