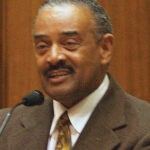 The valedictorian of his high school graduating class, Vernon Smith was a product of Gary schools, where he remained during a career as a teacher and administrator. As the state representative of House District 14 for the past three decades, he has taken on another role: defender of Gary schools and others like them against Republican-led experiments with vouchers, charters and an ongoing succession of standardized tests. Beset by declining enrollment, crumbling infrastructure and a shrinking tax base, Gary schools were taken over by the state in 2011, as were some in Indianapolis and later Muncie; those in Gary and Indianapolis have begun a return to local control.

Smith spent 16 of his first 20 years in the House in a Democratic majority, a span during which he held committee chairmanships and was much more prolific in getting his bills passed than he is now. To his credit during that time was the law that created the Indiana Commission on the Social Status of Black Males and others offering good-time credit to inmates who get an education and implementing tire recycling in Indiana.

In a Democratic minority since 2010, Smith has been able to do little to advance his own agenda of increased funding and local control of traditional K-12 public education, or to obstruct legislation that he sees as an attack on it – though he is effective at making the opposition wait. A sharp dresser and studied orator, Smith is among the most frequent to take the House microphone and most reluctant to relinquish it, sometimes extending debate on a bill by a half-hour or more.

Most of Smith’s legislative efforts center on education. Of the bills on which he is the primary author, the most recent to pass and be signed into law was in 2015, setting standards for school employees who supervise student teachers; the bill’s co-authors included Republicans. Generally, Smith goes it alone without co-authors, introducing bills that are assigned to committee and die there without a hearing – often the same bills session after session like the one seeking loan forgiveness for distressed school districts like the one he represents. He missed the final day of the 2019 session and thus did not vote on some of its most significant legislation.

Smith’s district includes the southern reaches of Gary and the Lake County suburbs in and around Merrillville – turf that varies between always Democratic and almost always Democratic. Smith hasn’t had a Republican opponent since 2010, when he won with 87% of the total vote, nor a primary challenge since 2012. – Kevin Morgan

HB 1001-2019 (State budget). Set funding for state agencies and services, including 2.5% annual increases for education, though not directly for teacher salaries. Excused