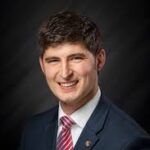 Indiana House District 21 is one of the districts positioned between Fort Wayne and South Bend that are ranked by political observers as among the most politically conservative in the state, due in large part to their rural populations and high evangelical presence. District 21 is represented by Timothy Wesco, who was 25 and the youngest member of the General Assembly upon his election in 2010. His official biography lists occupations as pastor of Calvary Baptist Church in Elkhart and firefighter with a township department.

Wesco took his place among a growing group of social conservatives in the Republican caucus. In 2015, he was listed as the first House sponsor of the Religious Freedom Restoration Act and was among the group of legislators and religious leaders standing behind Mike Pence in the now-iconic photo of the governor signing the legislation into law. Two weeks later, amid national publicity, Republican leaders scrambled to amend the law to alleviate concerns that it allowed discrimination against the LGBT community.

In the years since, Wesco has followed a legislative path that diverged from those of firebrands like Curt Nisly, his counterpart in a neighboring district whose outspoken social conservatism has alienated the more moderate Republican leadership and relegated him to the back bench. The two had a public breach in 2018 when Wesco refused to sign on to Nisly’s life-at-conception bill, which  would ban all abortions; Wesco based his reluctance on the inevitability of such a law being struck down in the courts rather than the merits of the bill itself. In 2019, Wesco took the lead in arguing against a bill amendment that would have rescinded state funding to private schools that engage in discriminatory hiring practices; the proposed amendment, which was voted down, followed the firing of a gay guidance counselor at an Indianapolis parochial school.

Rather than RFRA-like social issues, Wesco’s authored bills tend to deal with veterans’ issues and public safety. Appointed to chair the House Elections and Apportionment Committee, Wesco proposed legislation in 2020 that would have kept the polls open for two additional hours, to 8 p.m., on primary and general election days; he ultimately shelved the bill after testimony from county election officials concerned that they lacked the manpower to staff the additional hours. Also in 2020, Wesco introduced a late-session amendment that would have required the ouster of an Indiana attorney general if his or her license to practice law were suspended; it followed a hearing officer’s recommendation to the Indiana Supreme Court that the law license of the incumbent attorney general, Curtis Hill, be suspended due to sexual harassment allegations. The amendment passed the House but was not put up for a vote in the Senate. In 2021, his role as committee chairman placed him at the center of the state's decennial redistricting process, and while the Republican-led redrawn maps were widely criticized as gerrymandered, Wesco was praised for his handling of public hearings and his dealings with his House colleagues.

Wesco has drawn Democratic or Libertarian opponents in the past three elections, winning all convincingly. In 2020, he defeated his Democratic opponent – who also has held offices in the Indiana Libertarian Party – by about 7,000 votes. Wesco was among more than a dozen in his caucus -- most of them with similarly reliable voting records as social conservatives -- to fend off primary challenges from the right funded by the Liberty Defense PAC; Wesco's won nearly 85 percent of the primary vote.  – Kevin Morgan 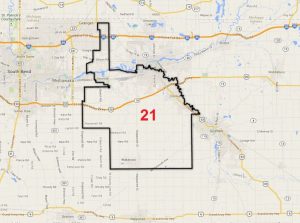