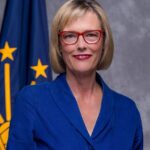 For Suzanne Crouch, the rise through the ranks has been steady. She arrived in the Statehouse in 2005, selected to fill a vacant House seat by Republican officials in Vanderburgh County where she spent more than a decade in county politics, serving as county auditor and county commissioner.

After eight years in the House, she was appointed state auditor, one of a half-dozen offices elected statewide in Indiana, after the incumbent resigned. Three years later, in 2016, she was elevated to lieutenant governor after a sudden shuffle resulting from Mike Pence’s elevation to the vice presidency and Eric Holcomb’s to governor. Presiding over the state Senate, Crouch generally avoided controversy except for casting the occasional tie-breaking vote; the most recent was late in the 2020 session when, after a heated debate between defenders of traditional public schools and education reformers, her yes vote effectively allowed charter schools to share in the proceeds from public school districts’ tax referendums.

She’s also proven a prodigious fundraiser and in 2019 moved $1 million from her own campaign into Holcomb’s for reelection in 2020. She is seen as a contender to succeed him in 2024. – Kevin Morgan