Only four men have been state legislators longer. But none of them, in their 20s or 30s when first elected to office, had the level of experience Klinker brought to her first term as a state representative in 1982. By then, she had already been a teacher for 22 years, was married and raising three teens, had presided over her local teachers union, ran political campaigns, coached several sports, volunteered and performed for myriad civic organizations (singing and playing the ukulele) and toured as a soloist with a famous big band leader. She’d even been voted Miss Purdue and named second runner-up in the Miss Indiana pageant in 1959, something she proudly notes even today in her General Assembly biography.

Elected to her 20th term in November 2020, Klinker was one month shy of her 82nd birthday, older in office than any men who have served as many terms as she has.

The Lafayette Journal and Courier and other media marvel at Klinker’s pace and energy.

“You know the drill when it comes to the Democratic state representative from Lafayette: ‘Where two or more are gathered in Lafayette, Klinker is in their midst,’” writes longtime editor, columnist and reporter Dave Bangert.

In the 2020 session, Klinker authored a bill to temper Healthy Indiana Plan regulations that take away a family’s health insurance for six months if they miss just one payment. It failed without a hearing.

So did most of the other 2020 bills she authored or co-authored. One would have reduced taxes for military men and women serving overseas, another created a foundation for the Indiana Veterans Home, and yet another provided tax incentives designed to boost the number of family doctors. A bill she sponsored regulating the treatment and sale of companion animals to further prevent their abuse and neglect did become law.

However, Klinker has sponsored successful legislation to strengthen Indiana’s humanitarian backbone through the years. A small sample:

While Klinker has supported dozens of bills that support education, women and families, she’s a rare Democrat who opposes abortion. From 2006-2019, she voted for seven major bills that would regulate abortion practices, and she authored a bill that became law in 2015 regulating clinics that provided the “abortion pill.”

But Klinker hasn’t voted for every bill that restricts abortions. In 1990, she voted against a bill that would ban abortions after 20 weeks, ban abortions by public employees and in public facilities, and require counseling and a 24-hour delay before an abortion procedure. At the time, she explained her position to the Journal and Courier. “When I voted ‘no’ on that bill, I didn’t vote ‘no’ as a Catholic. I voted ‘no’ because I thought the bill was wrong.” With the rest of her 29-member Democratic caucus, she voted against the 2022 abortion ban.

She joined fellow Democrats in demanding Gov. Holcomb call back all legislators for a special session in August to address absentee voting, federal funds for COVID-19 care and justice reform, as introduced by the Indiana Black Legislative Caucus, which would include a ban on chokeholds, racial profiling and no-knock warrants.

Purdue University’s student newspaper, The Exponent, reported that on May 31, Klinker wore a face mask as she cheered on demonstrators in downtown Lafayette protesting police brutality, racism and George Floyd’s death. A few weeks later, she attended a Juneteenth celebration in Columbian Park with State Rep. Chris Campbell, D-West Lafayette.

In an interview with Bangert, she explained her presence at these events. “When I go to these places, I talk to people; a lot of people call me with their problems because they see me and feel they can call.” – Kathleen Schuckel 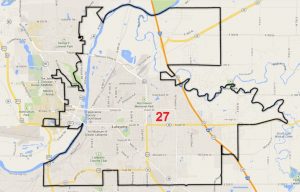