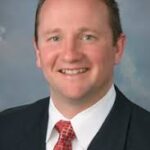 When Mike Braun stepped down from his Indiana House seat to launch an ultimately successful run for the U.S. Senate, Shane Lindauer stepped up.

Lindauer, a Jasper native, earned a Bachelor of Science degree from Indiana State University and bachelor’s and doctoral degrees from Logan College of Chiropractic in Missouri. He has been a member of the Indiana and Missouri national guards, has owned chiropractic and salvage businesses and served on the Dubois County Council.

Neither Lindauer nor Braun has faced a serious election challenge in the southwestern Indiana district. Appointed to the District 63 seat in October 2017, Lindauer was elected in 2018 by a 2-to-1 margin over Democrat Joseph Lannan. His margin over Democrat Teresa Kendall was closer to 3-to-1.

District 63 includes parts of Dubois, Daviess, Martin and Pike counties. Settled in the early 1800s by German immigrants (especially Dubois County), the area is home to agricultural and wood furniture industries and is known for conservative values and a strong family orientation. The largely rural district is reliably Republican:

Lindauer’s campaign platform is to be “pro-life and pro-Second Amendment,” and he favors small government with “as much local control as possible.” In the 2020 session, he was one of two House members to vote against a bill requiring schools to test their water for lead and copper contaminants, and was among a majority of House Republicans who tried unsuccessfully to remove rape and incest as exceptions to the 2022 abortion ban; he voted for the ban with the exceptions intact on its final passage. — Steve Hinnefeld 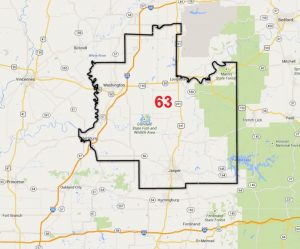