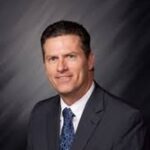 Southeast of Indianapolis, Indiana House District 57 centers on Shelby County and its county seat of Shelbyville. Though adjacent to Marion County and part of the Indianapolis metropolitan area, Shelby County is more rural than suburban, and has shared less in the area’s rapid development than its neighbors.  The district has been represented since 2006 by Republican Sean Eberhart, a Purdue-trained industrial engineer with an IU MBA; he left Roche Diagnostics after starting his own tool-rental business in Shelbyville. His official biography describes Eberhart as a strong advocate for individual rights, personal responsibility, limited government and fiscal integrity, and he uses these core principles as he considers legislation.’’

Eberhart broke with Republican leadership in 2014 to oppose House Joint Resolution 3, which would’ve recognized marriages only between different genders, and in 2016 to oppose a bill, eventually signed into law, which further limited access to abortions in Indiana, banning them for a variety of reasons including fetal defects. Explaining his vote from the House floor, he said he decided to oppose the bill after discussing it the night before with his wife, whom he described as “about as pro-life as they come … Today is a perfect example of a bunch of middle-aged guys sitting in this room making decisions about what we think is best for women. We need to quit pretending we know what’s best for women and their health care needs.’’ In 2017, he authored legislation that allows victims of domestic violence or others granted a protective order to carry a handgun without a permit, bypassing the permitting process, background checks and administrative fees; Eberhart said he intended the legislation, passed along party lines and signed into law, to provide added protection for victims.

Eberhart was one of the legislature’s earliest advocates of doing away with Indiana’s blue laws which banned Sunday carryout sales of alcohol, authoring House bills in several sessions before the enactment of a Senate bill allowing the practice in 2018; He also introduced bills to allow table games at horse racing casinos like Indiana Downs near Shelbyville, a change that was finally allowed in an omnibus gaming ball enacted in 2019. Also in 2019, as rental electric foot scooters began appearing on the streets of Downtown Indianapolis and other Indiana cities, Eberhart authored legislation, passed and signed into law, that placed some regulations on their use, to which bicycle rather than motor vehicle laws would apply – for example, that they can’t be used on sidewalks and that renters rather than owners take financial responsibility for accidents and damage; Eberhart rode one of the scooters down a House aisle to the podium to make his final argument for its passage.

The district has been held by Republicans since the 1980s, and Eberhart last faced a Democratic opponent in 2012, winning by a 2-to-1 margin. His only opposition seems to come in the Republican primary; Eberhart fended off challenges in both 2018 and 2020. – Kevin Morgan 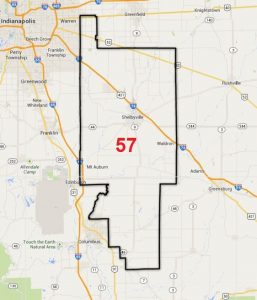