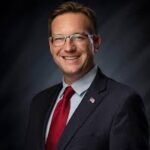 As one factory town after another diminished over the past 50 years, one in Indiana held its own. In Columbus, Cummins Engine was a bulwark amid the decline that left GM cities like Anderson and Muncie smaller and less prosperous. Now known simply as Cummins, with a new distribution headquarters taking its place in the Indianapolis skyline and outposts all over the world, the Fortune 500 company continues to enrich the economy and culture of its hometown. Columbus is at the heart of House District 59 and has been represented since 2018 by Ryan Lauer, a Cummins engineer who came through the ranks of Bartholomew County Republican politics.

Lauer twice challenged the Republican incumbent in the primary before his retirement cleared the way in 2018. His campaign targeted “establishment politicians who fail to deliver,’’ according to an interview in The Columbus Republic, specifically criticizing revenues from the state’s 2018 gasoline tax hike being redirected for uses rather than roads and infrastructure. He also promised attention to the state’s opioid crisis; despite the relative prosperity in Columbus, surrounding Bartholomew County is as hard-hit as many in rural southern Indiana in terms of poverty and substance abuse.

As a legislator, one of Lauer’s first bills to pass and be signed into law targeted theft by public officials. It provided that the pension funds of those who wrongfully use public funds for their own benefit can be tapped for reimbursement. Lauer said the legislation stemmed from his experience on the county council, where he saw small municipalities and school districts nearly bankrupted by embezzlement and similar crimes. In 2020, Lauer sponsored legislation, since signed into law, requiring that newborns be tested for a genetic disease known as ALD, for which early detection can forestall devastating effects later in life. He was among a majority of House Republicans to attempt unsuccessfully to remove rape and incest as exceptions to the 2022 abortion ban.

Columbus also is known as the hometown of former Vice President Mike Pence, a Republican; it drew national news coverage in 2019 when Democrats took control of the Columbus City Council and went into 2020 with high hopes. But in a rematch with his Democratic opponent from 2018, Lauer won his second term by an even wider margin.  – Kevin Morgan 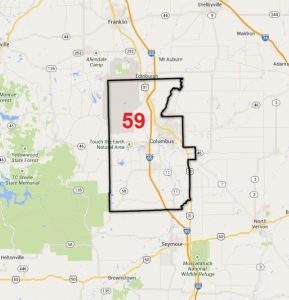