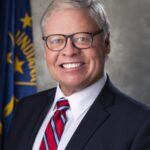 Since 1974, only two people have represented District 22 in the Indiana Senate, with six terms for Lafayette Republican Ron Alting following six by retiring West Lafayette Democrat Mike Gery. The district is anchored in a growing Tippecanoe County by Purdue University’s flagship campus of 46,000 students in West Lafayette. Across the Wabash River, Lafayette is home to an advanced manufacturing landscape that pumps out more than 300,000 Subarus a year, processes corn, fabricates aluminum parts, builds semi-trailers and makes jet turbines for the Airbus A320neo and the Boeing 737 MAX, workhorses of the passenger flight industry. Voters in Tippecanoe County – who went with Barack Obama in 2008, Mitt Romney in 2012, Donald Trump in 2016 and Joe Biden in 2020 – haven’t been prone to challengers in Senate District 22 over the past 12 terms.

Alting grew up in Lafayette, played basketball on standout Lafayette Jefferson High School teams and is still a fixture along the baseline stands during games at his alma mater’s Crawley Center. He has been part of what’s been, of late, referred to as “The Tippecanoe Way.” The upshot on both sides of the Wabash River separating Lafayette and West Lafayette: The two cities’ mayors – a five-term Democrat focused on job development and a four-term Republican open to resolutions on climate change and gun control – and largely Republican Tippecanoe County leaders have carved out a collegial, centrist approach keyed on recruiting jobs and businesses and setting the stage for Purdue to thrive, rather picking at each other over partisan matters. Even Purdue President Mitch Daniels, former Republican governor, plays a role in that, seeing West Lafayette and Lafayette’s success as fuel for the university’s rapid growth, and vice versa.

Alting returned to Lafayette in the early ‘90s, after time running restaurants in New Orleans with his late wife, Liz Patout Alting, and her family. In Lafayette, they opened and operated Patout’s of New Orleans restaurant. Alting won a seat on the Lafayette City Council in 1995, where he was council president. He won the District 22 Senate seat in 1998 with 53% of the vote, beating Jim Riehle, a six-term Democratic Lafayette mayor who had lost city hall in 1995.

With state Sen. Jim Merritt’s retirement in 2020, after the Indianapolis Republican’s 30 years in the Senate, Alting is the longest serving current member of the chamber. (It’s a distinction he doesn’t hold among Greater Lafayette’s delegation to the Statehouse. That goes to state Rep. Sheila Klinker, a Lafayette Democrat first elected in 1982.)

In recent years, Alting, chairman of the Senate’s Public Policy Committee, has played central roles on a handful of hot-button issues, including gambling reform and the drawn-out battles over Sunday retail alcohol sales. His potential sway over the compromise that eventually opened Sunday liquor sales showed in his Howey Power 50 ranking, clocking in at No. 13. Alting sided with liquor store owners who had protested possible lost markets if grocery stores could sell beer on Sundays. But he eventually helped usher the current system through the legislature, saying it was what the public wanted.

The following year, Alting shared the No. 16 slot in the Howey Political Report’s power rankings with Sen. Mike Bohacek, a Republican from Michiana Shores, after they promised to carry a hate crime bill in the 2019 session. Alting, even as he climbed ranks in the Senate GOP caucus as a pro-business conservative, maintained support in his district from the LGBTQ community. Part of that dated to his vote as a Lafayette City Council member against an effort to repeal protections based on sexual orientation in the city’s human relations ordinance. Part of that also dated to his retreat from House Joint Resolution 3, a proposed constitutional amendment that would have recognized marriages only between a man and a woman. (Alting voted for HJR3 in 2011 before abandoning it in 2014. He also voted for a similar measure in 2005 and 2007. Why switch? “My goodness, this vote go-around, compared to years ago, probably is 10-to-1 of my constituents … that are totally against this,” Alting told the Lafayette Journal & Courier.) As the Indiana Senate stripped proposed protections based on gender identity and sexual orientation from Alting and Bohacek’s bill in 2019, Alting swore he wouldn’t vote for the bill, even though it carried his name. “I gave my word that if it didn’t have sexual orientation in it and if it didn’t have gender ID in it,” Alting told the Lafayette newspaper, “this senator would not support it.”

Alting fell out of the Top 50 power ratings ahead of the 2020 and 2021 sessions. At one point ahead his most recent re-election campaign, in 2018, Howey asked whether Alting’s stance on Sunday alcohol sales and who could sell cold beer made him vulnerable heading into a sixth term in a campus town. Sherry Shipley, a Lafayette Democrat who said she challenged Alting to take on a Republican supermajority at the Statehouse more than anything, answered that question ahead of November for the Lafayette J&C: “Listen, I don’t feel like he’s vulnerable. I really don’t.” Shipley targeted Alting as part of a drive to create a down-ticket blue wave two years after the 2016 election of President Donald Trump. That year, Democrats won seats on the Tippecanoe County Council for the first time in more than two decades. Democrat Chris Campbell handily won the West Lafayette-based House District 26.  Democrats swept township trustee positions and township boards that had been solid Republican for years in Lafayette and West Lafayette. But Alting kept his District 22 seat with 55% of the vote. He gave his own version of “The Tippecanoe Way” that election night, telling the J&C: "When I answer a phone call from a constituent or somebody, I never ask what party they're for."

The 2021 redistricting provided Alting with a District 22 redrawn along more reliably Republican lines, and he faced no opposition in either the primary or general election the following year. Assured of at least another four years in the Senate's Republican supermajority, Alting continued to push against the growing social conservatism of his caucus during the 2022 special session called in the wake of the overturning of Roe v. Wade, emotionally arguing from the floor against the landmark ban on abortion as "mean and cruel'' and particularly attempts to remove rape and incest as exceptions to it. After one of his colleagues suggested from the floor that those exceptions would give legislators the godlike power to determine who lived and who died, Alting choked back emotion in replying, “You’re no closer to God than any of us who are going to vote no.'' Alting was one of nine Senate Republicans to vote against the bill on its final passage, but only among a few who opposed it because they felt that it went too far rather than not far enough. -- Dave Bangert