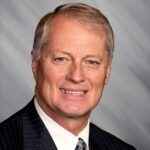 Indiana House District 67 includes the iconic town of Milan, home of the 1955 state champions who introduced the culture of Indiana high school basketball to the rest of the world. Milan’s high school remains, a survivor of sorts amid forces that in the years since have rattled the small town and others like it throughout the southeastern Indiana district. The gaming industry and a new automobile plant brought relief in recent decades, but average household income remains below the state median in five of its seven counties.

District 67 has been represented for the past 12 years by Randy Frye, a native of the area who returned after a career as a firefighter in Indianapolis. He is most vocal on support for public safety, veterans issues and the state’s motorsports industry; the Lucas Oil family is among his campaign contributors. In 2019, Frye authored and saw passed into law a bill that established a new task force to deal with the overcrowding of county jails, a problem throughout his district. Among its tasks is to identify alternatives to incarceration in dealing with substance abuse, another problem.

The district’s bigger employers include a Honda plant that began production in Greensburg in 2008 and three casinos along the Ohio River in Lawrenceburg, Rising Sun and Florence. Since they took shape during the 1990s, the riverboats brought a windfall in gaming taxes to the communities, particularly Lawrenceburg, but it since has abated with competition from casinos in Cincinnati. Legislation in 2019 providing for new casinos elsewhere in Indiana steered funding as a consolation prize to some existing locations, but a last-minute provision excluded Lawrenceburg and Rising Sun – a particularly hard hit to the latter.

The usually affable legislator led a futile charge against the bill on the session’s final night, warning his colleagues from the House floor that new casinos would be built “on the backs of the poorest people of our state.’’ In an interview with an area radio station, Frye said Rising Sun stood to lose nearly half of its annual revenue from gaming and warned that surrounding Ohio County was ranked as Indiana’s poorest before its casino opened. Nonetheless, the measure passed and was signed into law. He was among House Republicans to follow leadership in voting against an amendment to remove rape and incest as exceptions to the 2022 abortion ban, and voted for the ban with the exceptions intact on its final passage.

Frye occasionally has a Democratic opponent in the general election, most recently in 2018, when a woman from the northern part of District 67 called attention to deteriorating county roads and the ongoing opioid crisis. The district is reliably Republican, and Frye won by a 3-to-1 margin, as he did in the previous election. He was unopposed in both the primary and general elections in 2020 and 2022. – Kevin Morgan