In its relatively short history as a city, Gary, Indiana, has made more than its share of history. Founded in 1906 as the home for a new U.S. Steel plant and named for the first chairman of U.S. Steel, Gary grew in its first five decades to a population of nearly 180,000. Amid economic collapse of historic proportions, it lost most of that population during the past five decades. At its peak in 1967, Gary made history by electing Richard Hatcher as the first African American mayor of a major American city; he shared the honor with Carl Stokes of Cleveland, elected on the same day. Hatcher died in 2019 after seeing the eldest of his three daughters complete her first year representing District 3, which includes parts of Gary and outlying communities to its south and east, in the Indiana House of Representatives.

Ragen Hatcher succeeded Charlie Brown, a contemporary of her father and larger-than-life presence in his own right, celebrated particularly as a champion of public health during his 36 years in the Statehouse. Brown’s effectiveness as a legislator was aided by serving 16 of those years in a Democratic majority. Hatcher joined a caucus outnumbered 2-to-1 by Republicans and with virtually no control over the legislative agenda. All 14 bills on which she was primary author during her first two years, ranging in topic from a medical cannabis pilot program to mandating alternatives to dissection in Indiana classrooms, died in committee.

At 41, Hatcher has a record on her home turf, including two terms on the Gary City Council, interrupted by an unsuccessful run for mayor in 2015. During Eddie Melton’s short-lived bid for governor, she planned to run to succeed him in the state Senate; Melton changed his mind, as did Hatcher, filing instead for a second term in the House. As in most districts in and around Gary, the only contest comes in the Democratic primary and despite his standing, it was not unusual for Brown to be challenged for the nomination. In 2020, Hatcher won a rematch with her 2018 primary opponent and was unopposed in the general election. – Kevin Morgan 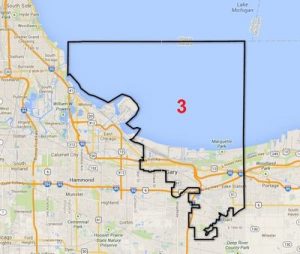