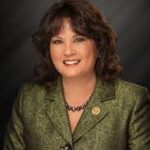 Indiana House District 60 used to be the domain of independent legislators who often bucked the party line. Arguably that changed in 2001, when boundaries were redrawn to make the district more heavily Republican – as it is today.

Republican Jerry Bales, an outspoken maverick, represented the district for 22 years, until conservatives got tired of his independence and ousted him in the 1998 GOP primary. That gambit backfired, as moderate Democrat Peggy Welch won in the fall and went on to hold the seat for 14 years.

Peggy Mayfield, the current representative, defeated Welch in 2012 after redistricting shifted the district’s center of gravity to the north. It now takes in much of Morgan County, including the cities of Martinsville and Mooresville, and part of Monroe County, where it wraps around the east side of Bloomington.

Mayfield, who lives in Martinsville, co-owns a Mooresville insurance agency and served as Morgan County clerk for six years before being elected to the House. She and her husband are active in the Boy Scouts organization and have hosted multiple international exchange students.

In the General Assembly, Mayfield has authored several bills restricting abortions and has been a stalwart supporter of gun rights. (She is an NRA-certified rifle and shotgun instructor and has coached youth shooting sports teams.)

She has also been active in insurance legislation and bills dealing with firefighters and fire departments, including a ban on using PFA, a foam-based fire suppressant linked to health problems, in firefighter training.  She serves on the House Insurance, Public Policy and Ways and Means committees.

After a relatively close contest with Welch in 2012, Mayfield has been able to count on 60% of the vote or more. After fending off a primary challenge against a Martinsville school board member who ran as an advocate for public education, Mayfield faced Democrat Tiffany Grant, a math teacher at Martinsville High School with a similar campaign focus; Mayfield won with 63% of the general election vote. She faced another primary challenge in 2022 -- from the right, one of more than a dozen Republican incumbents, most of them strong records as social conservatives, targeted by the Liberty Defense PAC on vaccines and other issues; Mayfield won renomination with about 65% of the primary vote. — Steve Hinnefeld 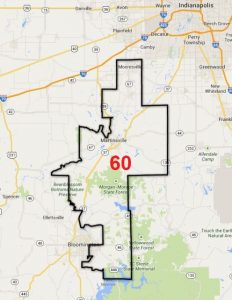