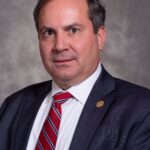 Senate District 8 covers a mix of urban, suburban and rural areas extending south from a pocket of beach communities on Lake Michigan. It includes the La Lumiere prep school from which Chief Justice-to-be John Roberts graduated in 1973, but also communities struggling with poverty and opioid abuse. Since 2016, the district has been represented by Republican Michael Bohacek, a former LaPorte County commissioner and owner of a logistics agency who won a seat that had belonged to Senate Democrats for 40 years. He resides in Michiana Shores, a few miles east of Roberts’ boyhood home in Long Beach, and upon his election identified economic development and the heroin epidemic in his district as his main targets.

Representing a district where the two-party system remains relatively viable, Bohacek has charted a relatively moderate legislative path. Among his more visible moments during his first term was co-authoring a bill in 2019 that included a victim’s sexual orientation and gender identity among aggravating factors that a judge could consider in sentencing for crimes of bias. Though the bill sailed through committee, it ran into opposition on the Senate floor, where mention of the two factors was removed. Bohacek was one of seven Republicans to join Senate Democrats in voting against the amendment removing the language but ultimately voted for the scaled-back provisions as they were enacted in other legislation.

In 2020, Bohacek authored legislation that would have barred juveniles convicted of gun crimes from possessing a gun until they were at least 26. Arguing for the bill, he said current law would allow the boy who shot and wounded a classmate and a teacher at a Noblesville middle school to own a gun when he turns 18. The bill had bipartisan support in passing the Senate: however, with six Republicans in opposition saying it might infringe on Second Amendment rights, it didn’t make it out of committee in the House.

At its northernmost, the district is a mix of blue and red; Hillary Clinton won precincts in both Michigan City and LaPorte in 2016, but Donald Trump won by large margins in rural areas to the south. It adjoins a Senate district and overlaps two in the House long held by Democrats. Bohacek won his first term by nearly 9,000 votes over his Democratic opponent, an 85-year-old woman who since has died, and was unopposed through the primary in 2020, but Democrats added a candidate, Gary Davis, to the ballot ahead of the June 30 deadline; Bohacek increased his winning margin to 11,000 votes. — Kevin Morgan