House District 12 encompasses parts of Hammond, Munster, Highland and Griffith in Lake County. The district was represented for most of the past decade by Democrat Mara Candelaria Reardon, except for a two-year interval after she lost a bid for reelection in 2014. In 2019, Reardon faced statewide publicity as she was among four women to accuse Attorney General Curtis Hill of inappropriate advances at a party in an Indianapolis tavern. In 2020, she opted against seeking reelection to run for the Democratic nomination to succeed outgoing U.S. Rep. Pete Visclosky in the 1st Congressional District; she finished fifth among the 14 primary candidates.

Her successor, elected in 2020, was Democrat Mike Andrade. Andrade, born in Pilsen, is an entrepreneur and says he recognized his interest in politics at a young age. His main platform topics in 202 were better pay for teachers, equitable retirement plans and appropriate funding for first responders, training programs for small business owners, living wages and job security for unions and working families, proper resources and affordable healthcare for the senior citizens and mental health services, jobs and housing opportunities for veterans.

Except for Candelaria Reardon’s upset loss in 2014, the district has favored Democrats. After winning the seat back in 2016, she ran unopposed for reelection in 2018.  – Emily Schabes 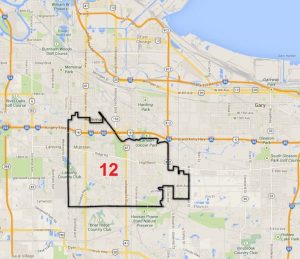