As Dan Burton made headlines with his attention-getting tenure on Capitol Hill, his younger brother pursued a legislative career of his own at the Indiana Statehouse. Charles “Woody” Burton, a real estate agent like his brother and seven years younger, began serving in the Indiana House seven years after his brother won election to the U.S. House – and seven years after Dan Burton retired from the U.S. House, announced his plans to do so in Indianapolis. Serving a northern Johnson County constituency centered on the city of Greenwood, his tenure has been far less controversial than his brother’s.  After a career noted for constituent service and efforts at property tax reduction as well as helping young people through anti-bullying programs and expanded treatment of dyslexia, Woody Burton also will be remembered for annually treating his House colleagues to White Castle hamburgers as home-stretch sessions continued through the dinner hour.

Given the consistency of House District 58 in electing Republicans, his departure triggered a five-candidate scramble in the 2020 Republican primary that included a former and a current Greenwood City Council member as well as a “conservative’s conservative” outspokenly opposed to abortion and supporting gun owners’ rights. But the winner was first-time candidate Michelle Davis, a career educator whom Burton had endorsed. Director of adult education at a vocational school in Greenwood, she said education would be her priority as a legislator, telling the Johnson County Daily Journal, “I want what’s best for the students, focusing on conservative values, and ensuring education dollars go to the classroom.” In the general election, Davis defeated Democrat Cynthia Reinert, Burton’s opponent from 2018, with more than 67% of the vote – a wider margin than Burton had managed.

After a relatively quiet first year, Davis made headlines in 2022 by authoring one of the most controversial bills of the session, requiring transgender girls and women to compete as their biological gender -- male -- in IHSAA sports, leading it to passage as well as an override of Gov. Eric Holcomb's veto. A few months later, she was among a majority of House Republicans to attempt unsuccessfully to remove rape and incest as exceptions to the 2022 abortion ban. -- Kevin Morgan 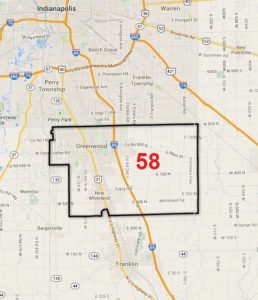