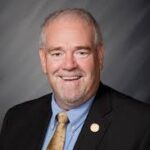 This very rural and deeply Republican district in northeastern Indiana returned Matthew Lehman to a seventh term in Indiana House of Representatives, where as majority floor leader he is the second most powerful member of the GOP caucus.

Lehman, an insurance agent, has shown he knows how to navigate sticky situations as the sponsor of some controversial legislation in recent years. One measure in 2019 would have allowed payday lenders to charge interest rates at levels the state currently considers loan sharking. The Indianapolis Star reported Lehman dropped the measure after determining it didn’t have enough support to pass.

Another Lehman proposal, which became law, prohibits local governments from stopping residents from using their properties for Airbnb destinations or other short-term rentals. The measure raised howls from those who questioned how Republicans could support such a measure if they truly believed in home rule.

Lehman was assigned the task of helping to figure out how the 2021 session of the Indiana General Assembly would complete its work amid the coronavirus pandemic. He was the chairman of a special interim study committee established to determine the best and safest alternatives to normal routines that often find lawmakers, lobbyists and citizens crammed into tight committee rooms for legislative hearings; the committee settled on legislative and rules changes that, for example, allowed House sessions to relocate to more spacious quarters in the Indiana Government Center.

During the 2021 session, Lehman led House Republicans in challenging Gov. Eric Holcomb's emergency powers during the pandemic, authoring and guiding to passage legislation that would have allowed the General Assembly to call itself into special session to review emergency orders -- leading to a veto, an override and ultimately a unanimous overturning of the new law by the Indiana Supreme Court.

After facing no opposition in the 2020 election, Lehman was among more than a dozen incumbent Republicans to face a challenge from the right from a Liberty Defense PAC candidate in the 2022 primary; Lehman won by a 2-to-1 margin. – Greg Weaver