House District 64 extends east from the Indiana side of the Wabash River, with Vincennes at its north and the outskirts of Evansville to its south. It has been represented since 2018 by Matt Hostettler, a Republican and son of former Congressman John Hostettler, who represented southwestern Indiana for 12 years on Capitol Hill. He hews to the same conservatism, particularly on social issues, displayed by his father and is seen as a likely candidate for the seat he held in Congress once Republican incumbent Larry Bucshon retires.

Even before the first day of business in the 2019 session, Hostettler had taken his place among social conservatives as one of four House Republicans to byline an op-ed in The Indianapolis Star warning against proposed hate crimes legislation. By allowing enhanced sentencing based upon a victim’s personal characteristics, the op-ed stated, the legislation would allow “prosecutors and judges the authority to prosecute and sentence based upon perceived thoughts, ideas, and beliefs.’’ To secure passage of the bill, House Republicans scaled it back to remove specific mention of gender identity and sexual orientation. Hostettler was among those who voted against it nonetheless.

Two of the bills that Hostettler authored during his first term were signed into law, one allowing candidates who decide to withdraw from a primary election an extra four days to take their names off the ballot, the other limiting legal liability of members of the government boards responsible for two bridges near Evansville. Hostettler briefly ventured into more newsworthy waters when he drafted but decided against introducing an amendment that would have put an early end to a Bureau of Motor Vehicles policy allowing a non-binary gender designation on driver licenses; the amendment would have required either a male or female designation. After a closed-door caucus of House Republicans, Hostettler said he reconsidered for parliamentary reasons; his proposed text was not sufficiently germane to the bill it would have been amending. In 2020, Hostettler was a co-author on a bill, passed and signed into law, to effectively slow down the phaseout of Indiana’s remaining coal-fired utilities.

He solidified his standing as one of the most conservative members of the House during debate on the 2022 abortion ban, arguing unsuccessfully from the floor for an amendment to remove exceptions for rape and incest. Hostettler was one of nine Republican votes against the ban on final passage, and one of only three whose opposition stemmed from the inclusion of the exceptions. 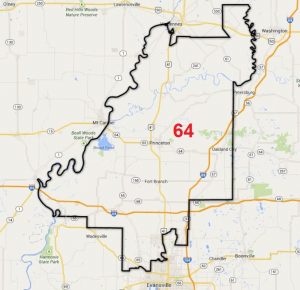