Republican Larry Bucshon, elected in 2010, is well-positioned in the House as a physician and a member of the Energy and Commerce Committee. He used that combination to try to influence the national response to the coronavirus, often on a bipartisan basis.

Bucshon was raised in the rural town of Kincaid, Illinois. As an undergraduate at the University of Illinois, his rightward shift solidified when he became enamored of President Ronald Reagan. In high school, Bucshon decided on a career in medicine, inspired by the surgeons he met at the hospital where his mother was a nurse. He got his medical degree at the University of Illinois at Chicago and completed a residency at the Medical College of Wisconsin, where he specialized in cardiothoracic surgery. Bucshon enlisted in the Navy Reserve, serving for nearly a decade. After three years in private practice in Wichita, Kansas, he joined Ohio Valley HeartCare, a large cardiology and cardiovascular surgery practice in Evansville. In 2003, he became its president.

Bucshon ran when Democratic Rep. Brad Ellsworth unsuccessfully sought a Senate seat in 2010. Helped by the National Republican Congressional Committee, Bucshon prevailed over seven other candidates in the GOP primary, edging out tea party-backed Kristi Risk, 33%-29%. In the general, he faced state Rep. Trent Van Haaften, who fit the centrist mold of Ellsworth. Van Haaften was a prosecutor in rural Posey County who emphasized his law-and-order background, while Bucshon campaigned on curbing spending and repeal of the Democrats’ Affordable Care Act. Bucshon won 57%-38%.

Bucshon actively opposed the excise tax on medical device equipment, as well as a Medicare cost-control board included in the new health care law. “I have been a practicing physician for over 15 years, and I don’t think I have seen anything potentially more detrimental to seniors’ health care than the Independent Payment Advisory Board,” he said. But conservatives criticized his backing of the August 2011 increase in the debt limit, unlike other Indiana GOP freshmen.

In a 2018 profile , the Evansville Courier-Press described Bucshon as “a serious, sober minded—if unspectacular—legislator” who was in the middle of the House. A colleague said he was “a work horse, not a show horse.” On Energy and Commerce, he joined in bipartisan support for the 2015 law establishing a permanent fix of Medicare reimbursement of doctor fees. He worked with Republican leaders on their priority legislation to treat opioid addiction. He criticized in November 2018 a proposal by President Donald Trump to limit prescription-drug prices; Bucshon called it a step toward “government price-fixing.”

Bucshon worked with another physician with experience as an administrator, Democratic Rep. Ami Bera of California, to repeal a complex billing procedure imposed by Medicare officials. In October 2020, the two doctors called for a two-year freeze on cuts in Medicare reimbursement rates to encourage more complete coverage during the pandemic. Separately, Bucshon urged more-thorough testing to limit the spread of the coronavirus. “For decades, Republicans and Democrats in both the administration and in Congress have devoted inadequate attention and resources to critical pieces of our public health system,” he wrote in The Indianapolis Star in July 2020. He cited legislation that he filed with Diana DeGette of Colorado, an Energy and Commerce Democrat, to establish a framework for oversight of diagnostic tests.

Also on Energy and Commerce, Bucshon worked on energy legislation to promote his district’s large coal resources, and telecommunications priorities such as expanded broadband access. With Democratic Rep. Tony Cardenas of California, he proposed in 2020 a bill to grant $500 million to states and localities to expand recycling, especially plastics.

In 2012, tea party candidate Risk mounted another primary challenge but could not come close to competing financially, and the incumbent won 58%-42%. His Democratic challenger in the general election was broadcaster and former state Rep. Dave Crooks, who touted his own culturally and fiscally conservative views. Bucshon got help from conservative super PACs, notching a hardly overwhelming 53%-43% victory. Since then, Bucshon has become entrenched. In 2020, he was reelected, 67%-30% against Thomasina Marsili, an emergency medical technician and motivational speaker. In what had been a competitive district, the Courier Press wrote following the 2020 election, “Democrats face challenges in any campaign against Bucshon.” -- The Almanac of American Politics 2022 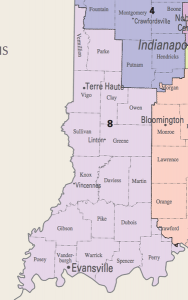