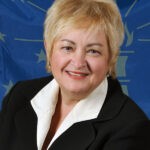 In an Indiana Senate where Republicans hold a 39-11 supermajority, Democratic senators find little traction for a progressive agenda. But from the minority, efforts continue to keep GOP dominance in check. Count state Sen. Karen Tallian, a Democrat representing Indiana Senate District 4, among those voices, pushing for LGBT rights, access to affordable health care and proposed reforms in Indiana’s justice system – most notably on the state’s position on marijuana as surrounding state’s opt for legalization.

Tallian, a lawyer from Ogden Dunes, came to the Senate in 2005. She filled a remaining term of Sen. Rose Ann Antich-Carr, a Merrillville Democrat, who left for a position as the city’s clerk-treasurer. Tallian was reelected in 2006, 2010, 2014 and 2018 in a Northwest Indiana district that includes Portage, parts of Michigan City and scenic sections of Indiana’s shores along Lake Michigan. She won more than 60% of the vote in her most recent Senate reelection campaign covering counties – LaPorte and Porter – that went with Republican Donald Trump in the past two presidential elections.

Tallian is ranking minority member of the Senate Appropriations Committee and part of the State Budget Committee. During her tenure, she’s made overtures for statewide office.

In 2015, she announced a planned bid to run for governor in 2016, promising to be a progressive voice at time when Gov. Mike Pence was lining up a reelection bid. (Pence eventually left that race in 2016 to join the Trump ticket as the Republican vice presidential candidate.) “I don’t think Indiana is as conservative as this legislature would have you think,” Tallian said, as reported by NUVO at the time. “I think that most of Indiana is in the middle of the road, and I think our governor is way far out on one side of that road.” Tallian backed away from that bid, and the Democratic nomination eventually went to John Gregg.

In 2020, Tallian sought the Democratic nomination for Indiana attorney general. She promised a nearly completely different approach to the job as then Attorney General Curtis Hill had taken – “He’s on the opposite side of all the policy positions I have,” she told WFYI – when it came to access to health care, abortion rights and criminal justice reform. In particular, she said her first move would be to have the state retreat from pending lawsuits challenging the Affordable Care Act. Democrats instead chose Jonathan Weinzapfel, former state representative and former Evansville mayor. (Weinzapfel lost by a wide margin in November to Republican Todd Rokita.) Disappointed, Tallian told the Times of Northwest Indiana after the Democratic convention defeat: "But I will be in the state Senate, in January, and will be working on all those things that are so important to all of us."

In the Senate, Tallian’s efforts at criminal justice reform includes attempts to automatically expunge juvenile records for misdemeanor counts. In 2021, she and other Senate Democrats pushed for an increase in worker’s compensation for those injured on the job. Tallian has protested changes to Indiana’s school funding formulas that put additional weight on private school voucher and has lobbied unsuccessfully in past sessions for an increase in the state’s minimum wage.

Tallian continues to be among the leading voices for changing Indiana’s punitive approach on marijuana laws, compared those in surrounding states. (Michigan and Illinois has laws that allow recreational use of marijuana; Ohio and Kentucky allow it for medical use.) “The states are falling in line, I certainly hope that we’re not last,” Tallian told CNHI newspapers in 2020. “I’ve offered every kind of discussion you could possibly think of. (Legislators) all know that they’re going to have to have this conversation.” Tallian acknowledged the uphill battle, telling Evansville Courier & Press columnist Jon Webb: “There are a lot of people here in the Senate who are just either very afraid of (marijuana legalization) or truly believe that, you know, it’s the gateway to hell.” As marijuana- and hemp-related bills stalled again in 2021, Tallian told The Indianapolis Star that she’d “been through three governors on this. … Someone's gotta keep pushing, so I guess that's my job.” -- Dave Bangert