How strong was the Republican sweep of the Indiana General Assembly that began in 2010? Strong enough that as it continued, Republicans were able to snare seats even in Lake County, long a bastion of Democratic power in northwest Indiana. The Trump backlash of 2018 was strong enough for Democrats to take back two of those seats – but not by much. In House District 19, Democrat Lisa Beck, an attorney and former deputy prosecutor who campaigned on issues of workers’ and women’s rights, unseated two-term incumbent Julie Olthoff by 251 votes, a relative landslide compared to the 82 votes by which the Republican incumbent lost in a neighboring Lake County district. But in 2020, strength at the top of the ticket — and in their campaigns’ fundraising – propelled both back into the General Assembly; Olthoff defeated Beck by more than 1,000 votes. The two are set for yet another rematch in 2022.

As culture wars waged within the Republican supermajority during the past decade, Olthoff was among those in the caucus to steer clear of the divisive. Unlike others in the Republican caucus who broke ranks with leadership to oppose it, Olthoff voted in support of a bill in 2016, eventually signed into law, banning abortions sought because of fetal defects and another in 2017 that would have curbed drug-induced abortions; the latter passed the House but did not make it out of a Senate committee.

As a legislator, Olthoff focused on issues that drew bipartisan support – for example a bill that she authored in 2016 to redistribute $2 million in state funds toward helping victims of sexual assault, and another requiring several new steps to create suicide prevention programs. Both bills passed unanimously and were signed into law. Like her fellow Republican in nearby District 15, Olthoff says her campaign to reclaim her seat was based on the belief that Lake County needs a representative who can work within a Republican supermajority that grew even stronger in 2020 – “someone that can build bridges and find common ground within the legislature.’’ She was among House Republicans who supported leadership in voting against an amendment to remove rape and incest as exceptions to the 2022 abortion ban, and voted for the ban with those exceptions on its final passage. – Kevin Morgan 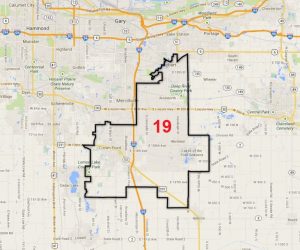