Anyone from Indianapolis who identifies as a Southsider very possibly lives or has lived in House District 93. It straddles the Marion-Johnson county line, taking in midcentury suburbs in Perry Township, millennial custom-built homes in Center Grove and small towns like Southport and Glenn’s Valley surrounded by their development. When a 27-year incumbent retired unexpectedly in 2019, it didn’t take long for the district’s Republican officials to settle on a replacement to finish his term. At 64, Dollyne Sherman had never held an elected office, having spent most of her career in media communications for Republican political candidates as well as the governor’s and Indianapolis mayor’s offices. The proximity to power, she said, left her with an uncommon knowledge of the issues and strong connections to decision-makers: “I know who to go to when I need something done,’’ she said after her selection. “So I can hit the ground running and there won’t be a learning curve.’’

It was a shorter-than-expected run. Sherman was ousted in the June 2020 primary by a challenge from the far right. First-time candidate John Jacob, a former auditor for the state Board of Accounts who started a design firm with his wife, beat her by 71 votes. “Jacob is also involved in Christian ministry with his wife, including marriage mentoring, street evangelism, ministering international students and completing mission trips,’’ the Daily Journal of Johnson County reported when Jacob announced his primary campaign. “His faith and prayers culminated in his run for office.’’ Quoting Jacob, the Daily Journal story outlined a legislative agenda that would position Jacob among the most socially conservative members of the House Republican caucus: ”If elected, Jacob would also focus on cutting taxes and passing a constitutional carry law in Indiana, which would allow residents to own firearms without government restrictions. ‘I’m not wanting to regulate abortion, I want to end abortion completely, totally in Indiana,” Jacob said. “I think the government overreaches … people’s religious freedoms are being violated. Our second amendment rights are being violated across the nation.’”

Statehouse watchers were already familiar with Jacob. An Indianapolis Star story in October 2020 described his frequent protests during legislative sessions and his standard attire of “what looks like blood-stained blue medical scrubs. He wears a partially dismembered child’s doll made to look like a bloody aborted fetus attached to a cord around his neck. And he often carries a large and graphic picture of a bloody aborted fetus.’’ The article also noted Jacob’s Facebook posts from previous years in which he condemned Roman Catholicism and Islam.

News coverage of the posts noted the likelihood that they wouldn’t affect Jacob’s chances of winning the election; Perry Township is among the last Republican strongholds in Marion County, and the suburban areas of Johnson County so far seem to have steered clear of the Democratic realignment seen nationally and elsewhere around Indianapolis. Sherman’s predecessor regularly won reelection over Democratic opponents by several thousand votes, as Jacob did. Legislative leaders condemned the posts after Jacob’s election and arrival in the House for the legislative session – when Jacob again drew attention as one of only two legislators to not wear the face masks urged as a public health precaution during the coronavirus pandemic. – Kevin Morgan 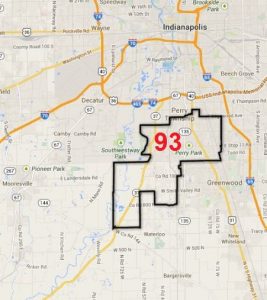