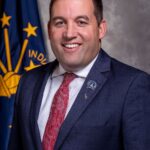 Indiana Senate District 24 includes most of Hendricks County, second only to Hamilton among the populous suburban counties around Indianapolis, and most of more rural Putnam County to the west. It is represented by John Crane, scion of a political family that included two U.S. congressmen, one of whom ran for the Republican presidential nomination in 1980 appealing to conservatives as a younger alternative to Ronald Reagan. Crane, a former youth minister who leads a faith-based leadership organization, was a first-time candidate in 2016 when he ran a successful primary challenge against an incumbent who had broken with Republican leadership in 2014 to vote against House Joint Resolution 3, which would have recognized marriage only between different genders.

In an interview after his election, Crane alluded to his desire to make the Republicans’ 4-to-1 advantage in the Senate more of a force for social conservatism: “Probably the biggest thing that caused me to run was to see some of the decisions that were coming out of the legislature. I would say especially since we have a Republican supermajority, there were some issues that I disagreed with and felt like maybe I could come down and make a difference. … I’m very interested in religious liberty, life issues, marriage, some of the social issues. I have a pretty strong background in that area.’’

In a column in the Indianapolis Business Journal in 2019, Crane argued for Republican legislative leadership’s plan to pass a hate crimes law that did not specify victim characteristics such as sexual orientation or gender identity; Republican Gov. Eric Holcomb, pushing for legislation that would move Indiana off the list of states without a hate crimes law, had favored a bill that specified victim characteristics. “The inherent assumption is that getting off that list is more important than protecting the citizens in our state,’’ Crane wrote. “… When considering how to construct a hate crimes law, shouldn’t we strive to protect all victims of hate, rather than subjectively creating a list which protects only certain groups of people?”

In his first session, Crane was listed among the authors of a bill titled “possession of a firearm by an illegal alien’’ that was passed and signed into law. It added to state law a felony for which undocumented immigrants could be sentenced to 2½ years in prison. In 2019, he authored two bills, both passed and signed into law, which expanded the roles that faith-based and other community groups could take in substance abuse counseling and child welfare. Election security also has been a focus of his introduced legislation, with three bills passed and signed into law during the past two sessions. In 2020, Crane also introduced a bill to designate basketball as Indiana’s official state sport; it was assigned to a Senate committee from which it did not emerge.

Some traditionally Republican suburbs of Indianapolis have begun to reflect a realignment toward Democratic candidates; in District 24 – long a Republican stronghold – it would be a revolution. Democrats did not contest the district when Crane was elected in 2016 but fielded a candidate in 2020, Stan Albaugh, a retired Air Force colonel who served in Iraq and joined the State Department in Baghdad after his retirement. Crane won a second term with 65% of the general election vote. – Kevin Morgan 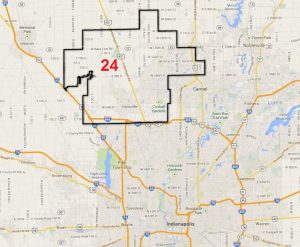