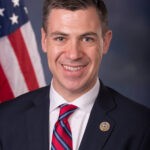 Jim Banks was elected in 2016 to an open seat following a competitive primary in a traditionally Republican district. With extensive experience in the Navy Reserve plus support from national conservative groups, he emerged following the 2020 election as a leader of House conservatives. His position as chairman of the Republican Study Committee has become an influential platform for rising junior House Republicans.

Banks was born and continued to reside in Columbia City, not far from Fort Wayne. He graduated from Indiana University, where he was president of College Republicans, and got an MBA at Grace College and Seminary. He worked as a real estate broker with the Bradley Co. in Fort Wayne. Elected to the state Senate in 2010, where he claimed the most conservative record, he chaired the Veterans Affairs and the Military Committee. He invoked a state law to take a leave of absence in 2014, while he served for eight months at NATO headquarters in Afghanistan, where he assisted with equipment for the Afghans. He received the Defense Meritorious Service Medal for his military leadership. During that time, his wife, Amanda Banks, was appointed acting state senator.

When Rep. Marlin Stutzman announced that he was running for an open Senate seat in 2016, Banks staked out ground among conservative advocacy groups. His political consultant told Banks that he needed to become “less wonky” during the campaign, according to a story in GQ. Affiliates of the Club for Growth and the Senate Conservatives Fund spent more than $700,000 on his behalf. He won the primary with 34 percent to 32 percent for Kip Tom, a local farmer, and 25 percent for state Sen. Elizabeth Brown. David McIntosh, head of the Club for Growth who during the 1990s served in an adjacent district, made the election of Banks a top priority and took credit for playing a “pivotal role” in the victory. In the general, Banks defeated Tommy Schrader, a perennial Democratic candidate, 70%-23%.

On the Armed Services Committee, Banks said his objective was to “ensure our men and women in uniform receive the resources they need to protect our nation.” In 2017, he filed a bill to authorize the use of force against the Islamic State in Iraq and Syria (ISIS). “The Constitution grants Congress the power of declaring war, and we need to take that obligation seriously,” Banks said. “Rather than continuing to fight ISIS under an authorization passed by Congress in 2001 to fight al-Qaeda, it is time to pass a new authorization for the use of military force against ISIS.”

Banks made other attempts to call for discipline in the nation’s foreign policy. Following the friendly meeting in Helsinki in July 2018 between President Donald Trump and Russian President Vladimir Putin, he warned, “Russia is not our friend.” Banks unsuccessfully urged Treasury Secretary Steve Mnuchin to cancel a visit to Saudi Arabia that October “until the world receives answers” about the apparent murder of journalist and activist Jamal Khashoggi, a 1983 graduate of Indiana State University, at the Saudi embassy in Istanbul. In October 2019, he voted for a House-passed resolution that condemned President Donald Trump’s withdrawal of U.S. troops from Syria. “I don’t believe we can afford to turn our backs on this region,” he said in an interview with National Public Radio. “If we see a resurgence of ISIS as many of us are worried and predict that we will, this will be a decision by this administration that we will live to very much regret.”

As the top Republican on the Veterans Affairs Subcommittee on Technology Modernization, Banks reviewed the costly upgrade of veterans’ medical records. The Defense Department, he found, maintains 10,000 information technology systems, many of which are “outdated and ill-managed, creating a self-imposed burden in the task of effective communications security.”

On the home front, the political challenges for Banks eased when he won reelection in 2018 without a Republican primary opponent. Democrat Courtney Tritch, who ran a marketing firm, spent nearly as much as the $1.1 million by Banks. The incumbent took all 12 counties and won, 65%-35%, including 56 percent of the vote in the population center of Allen County. In the 2020 Republican primary, local physician Chris Magiera self-financed his challenge with $290,000 but was defeated, 85%-15%, clearing the way for Banks' reelection to a third term by a comfortable margin that fall.

Banks continued at times to distance himself from Trump even before the former president left the White House. Trump’s agenda was more popular than his personality, Banks said. Following the 2020 election, he was among the early Republicans who said publicly that the party was moving into its “post-Trump era.”

But Banks was among one of 126 Republican House members to sign an amicus brief in support of a lawsuit – which the U.S. Supreme Court later declined to hear -- contesting the results of the 2020 presidential election, and was among 147 objecting on January 6 to the certification of the election results. After that day’s attack on the U.S. Capitol, Banks initially expressed support for a bipartisan commission to investigate, but later recanted. In July 2021, House Speaker Nancy Pelosi vetoed the assignment of Banks and U.S. Rep. Jim Jordan to the January 6 Select Committee, citing their past support for Trump’s claims of fraud in the election. In October 2021, U.S. Rep. Liz Cheney, vice chair of the Select Committee, criticized Banks for communications to federal agencies in which he claimed that he – not Cheney – was the ranking Republican member of that committee.  — The Almanac of American Politics 2022