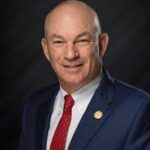 Jeff Ellington made his first bid for the legislature in 1998, when he knocked off longtime lawmaker Jerry Bales in the Republican primary – then lost in the general election to moderate Democrat Peggy Welch.

Undeterred, he dug in at the local level, completing two terms on the Monroe County Council and serving as county recorder and plan commission member. He made it to the legislature in December 2015, when a GOP caucus chose him to succeed District 62 Rep. Matt Ubelhor, who had resigned.

Ellington was elected in 2016 and re-elected in 2018, carrying the district by comfortable margins each time. In the 2020 general election, he won more than 60% of the vote against a Democratic challenger.

District 62 includes most of Greene County and parts of Daviess, Martin and Monroe counties. It reaches from Linton in the west to the outskirts of Bloomington in the east to the Crane Naval Surface Warfare Center in the south.

Ellington, a retired Bloomington firefighter and the owner of a tree service business, has been a GOP team player in the House, generally following party leaders and advocating for his mostly rural constituents. He has sponsored legislation dealing with property ownership, consumer protection and other matters.

A conservative stalwart in mostly liberal Monroe County, he has been a thorn in the side for Democratic leaders of Bloomington, promoting legislation to prohibit the city from annexing nearby properties and to restrict the mayor’s authority over taxing and local planning decisions. In his campaign materials, Ellington put “jobs, economic development and constitutional rights” at the top of his priority list. He has also advocated for infostructure funding, including roads, bridges and digital networks. — Steve Hinnefeld 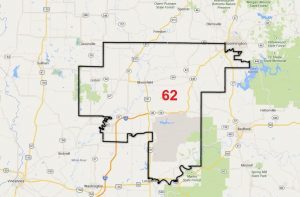