Republican freshman Jim Baird brought a combination of academic, business and political experience in the Indiana farm community to his surprising victory in an open district in 2018. Although Baird trailed significantly in fundraising, his chief opponent’s support from outside political action committees may have backfired in the GOP primary. Baird succeeded Todd Rokita, who lost the GOP Senate primary to Mike Braun—the older brother of Steve Braun, who had been expected to defeat Baird.

Baird got his undergraduate and master’s degrees in animal science from Purdue University and his Ph.D. from the University of Kentucky, where he specialized in nutrition for pigs. He served as a first lieutenant in the Army during the Vietnam War, where he lost an arm during combat. His suffered his injuries when his battalion was ambushed by Viet Cong forces while delivering cargo along a supply route. A lifelong resident of the district, Baird owned several businesses, including a family farm and a home healthcare agency. He was a livestock specialist with Purdue University’s Cooperative Extension Service.

Following his service as a Putnam County commissioner, he was elected to the Indiana House for eight years. He worked on agriculture and veterans issues, and chaired the Health and Medicaid Subcommittee of House Ways and Means. He received an award for civility among the legislators.

In the contest to replace Rokita in the heavily Republican district, Steve Braun was well-connected, including his stint as head of the Workforce Development Department under then-Gov. Mike Pence. Braun was endorsed by the state Chamber of Commerce and the Farm Bureau. Diego Morales, another GOP candidate, also had been an aide to Pence in Indianapolis. Even with his lengthy time in office, Baird ran as an outsider, with his attacks on “career politicians” and calls for “a common-sense approach to fix the broken system in Washington.” Compared to the $1.2 million Braun raised, Baird raised little more than $200,000 for the primary—most of which was from a personal loan. But he displayed a superior grassroots appeal.

The closing days of the campaign were marked by negative advertising from several outside political action committees. One of those late mailers criticized Baird’s vote to increase the state’s gasoline tax and said he had cost Hoosiers “an arm and a leg.” Given his war injuries, that attack generated a sympathetic response for Baird from voters. “Disrespecting our wounded combat veterans crosses a line that Hoosiers will not tolerate,” responded Baird, who earned a Bronze Star and two Purple Hearts in Vietnam.

Baird won the primary with 37 percent of the vote to 29 percent for Braun and 15 percent for Morales. The turnout of 80,000 voters, which likely was driven by local support for Rokita, was the largest of any district in Indiana in the primary. In this heavily Republican district, Baird easily defeated Democrat Tobi Beck, a woman Army veteran.

In the House, Baird was assigned to the Agriculture, and Science, Space and Technology committees. He continued his collegial approach and search for bipartisanship. With first-term Democratic Rep. Haley Stevens of Michigan, he filed a bill to encourage more education of young girls at an early age in the fields of science, technology, engineering and math. Stevens and Baird were the leaders of the Research and Technology Subcommittee of the Science panel. With Democratic Rep. Bill Foster of Illinois, Baird filed a bill to increase federal research and development programs that focus on industries of the future, such as artificial intelligence and advanced manufacturing.

In 2019, he called for an increase in legal immigration, citing the need for more workers in agriculture and the hospitality industry. “We don't have enough workers for some of these companies to expand like they would like to,” Baird told the Lafayette Journal and Courier. In 2021, he became ranking Republican on the Agriculture Subcommittee on Biotechnology, Horticulture and Research, where he said that he would be “leveraging my expertise to pursue sound science and risk-based policy to benefit America’s farmers.”

Baird won reelection, 67%-33%, against Democrat Joe Mackey. Baird won all 16 counties. In Lafayette-based Tippecanoe, the only county where Baird got less than 64 percent of the vote, he won with 52 percent. Following the 2020 election, Baird was one of three House Republicans from the seven in the Indiana delegation who voted against certifying the Electoral College results in Arizona and Pennsylvania. “Concerns remain on how several states enacted new election rules without the consent from their state legislatures,” he said. -- The Almanac of American Politics 2022 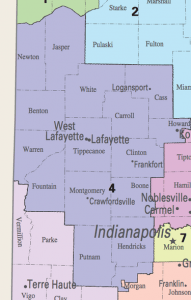