Freshman Republican Greg Pence rode to an easy victory in 2018 and then settled into a district that his younger brother, then-Vice President Mike Pence, held for 12 years before he was elected Indiana governor in 2012. With his minimal engagement at campaign events, in legislative sessions or with the news media, Greg Pence has benefited from close connections to influential political players to raise robust campaign funds and gain prominent endorsements. He has largely ignored his political opponents, including a self-funding Republican businessman who accused Pence of “running on nepotism.”

After graduating from Loyola University of Chicago, where he later received a master’s degree in business administration, Pence served as a lieutenant in the Marine Corps. He had a prominent business career in the Columbus, Indiana, area that took a separate route from his politically adept brother. Those marketplace experiences had a mixed record that left millions of dollars in fines and debt.

Following his father’s path, Pence became president of the Kiel Brothers Oil Company, a local oil-supply business that developed a chain of more than 200 convenience stores in Indiana and surrounding areas. But the company faced financial difficulties after the state assessed an $8.4 million penalty for causing environmental damage with leaky storage tanks. Additional problems ensued when the price of oil collapsed in the years after Pence took control.

In 2004, “the chain announced it was filing for bankruptcy. Pence resigned that same day,” The Indianapolis Star reported in a campaign profile of Pence. According to The New York Times, a Columbus bank—on which Pence had served as a director—later sued him for $3.8 million in debts he had guaranteed; Pence agreed “to settle for pennies on the dollar.” A Pence campaign aide said the business problems resulted from major changes in the oil industry beyond his control.

When Republican Gov. Mitch Daniels took office in 2005, he gave Pence the number-two position with the Indiana Department of Environmental Management, the same agency that had fined his oil business for its spills and for failure to comply with safety regulations. Pence left that position after less than three months, “saying his work was finished,” The Star reported. In recent years, Pence and his wife Denise owned two antique malls in southern Indiana.

In Pence’s 2018 campaign, he raised more than $1.2 million prior to the primary. His chief opponent in that contest was Jonathan Lamb, a former commodities trader who became a successful local businessman and mostly self-financed his campaign with $450,000 in personal loans. Lamb, who said Pence was “unwilling to be transparent and upfront with the voters about his failure and share his business resume,” also criticized his opponent’s scant campaign appearances. “How can we educate the voters on what the true issues are if the perceived heir-apparent to the seat won’t talk and grant interviews?” Lamb told The Star.

Like his brother Mike, Pence emphasized his conservative views on social issues. Even with his deep Washington connections, his campaign slogan styled him as an outsider, proclaiming, “Greg Pence will fight for Hoosier values, not D.C. values.” His campaign website did not directly refer to the vice president, beyond the candidate’s staunch support of “the Trump-Pence agenda.” Pence defeated Lamb, 64%-24%. In the general election, Pence gave little attention to lightly funded Democrat Jeannine Lee Lake. He won, 64%-33%.

In the House, Pence got seats on the Foreign Affairs, and Transportation and Infrastructure committees. He left few tracks during his first term. He received limited public attention, beyond his connections to his more influential brother and to President Donald Trump. When the Foreign Affairs panel was among the House committees investigating the possible impeachment of Trump, Pence’s chief of staff dismissed a press inquiry about whether his boss would recuse himself because of a potential conflict of interest.

Pence gravitated more toward the political side of Washington. In November 2019, Politico listed him among the members of Congress who were the most prolific spenders at Trump properties, including his hotel on Pennsylvania Avenue. Later, he was among nearly two dozen House members friendly to the Trump-Pence ticket who were designated as Congressional Captains by the presidential fundraising committee.

In his reelection campaign, Pence had a rematch with Lake. This time, she stirred more attention, including a report by ABC News that she used social media to accuse Pence of selling objects with offensive racial depictions at his antique malls. Lake described “awful objects degrading and dehumanizing Black people” and said, “it made me want to cry.” A spokesman for Pence denied the accusation and added that he “is not engaged in the active management” of the mall. Neither Lake’s accusations nor Pence’s activities appeared to affect adversely his political fortunes. He widened his victory to 69%-28%. In Muncie-based Delaware County, Pence took 55 percent.

Pence  was among one of 126 Republican House members to sign an amicus brief in support of a lawsuit – which the U.S. Supreme Court later declined to hear -- contesting the results of the 2020 presidential election, but, bucking a majority of House Republicans, voted in support of his brother’s decision as vice president to certify the election results on January 6. An AP article later noted Pence’s extraordinary experience on that day: “As chants of “Hang Mike Pence” echoed in the Capitol, the Republican congressman from Indiana and his better-known brother were whisked away from the Senate by the Secret Service shortly before a mob of Donald Trump supporters burst in, intent on stopping the vice president from certifying Democrat Joe Biden’s win.

“Their dramatic escape, caught on security cameras, came minutes after Trump excoriated Mike Pence on Twitter for lacking the courage to use his ceremonial post presiding over the certification of the 2020 election to overturn its outcome.

“'My brother was being asked to do what we don’t do in this country,' Greg Pence later recounted at a Republican fundraising dinner in his district, one of the rare instances he has spoken publicly about the attack. He later added, “’ I couldn’t be prouder.’”

Pence voted against the establishment of the January 6 Select Committee, accusing Democrats of trying to carry out the “political execution of Donald Trump.’’

Also in 2021, Pence joined the Energy and Commerce Committee. “Especially during the COVID-19 pandemic, Energy and Commerce leads the way in Washington,” Pence said, while citing the panel’s work on health care, communications and energy issues. – The Almanac of American Politics 2022 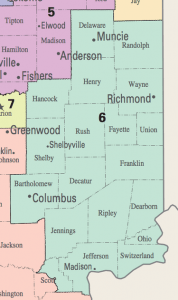