Frank Mrvan narrowly won the 2020 Democratic primary, which was the ticket to victory in the longtime Democratic stronghold in northwest Indiana. In a battle of entrenched family dynasties, his chief opponent was Thomas McDermott Jr. Each had served for more than a decade as the chief executive of communities in neighboring parts of Lake County. Mrvan benefited from key endorsements from the United Steelworkers Union and retiring Rep. Pete Visclosky, a low-profile lawmaker who held the seat for 36 years and chaired the Appropriations Subcommittee on Defense. Visclosky held the record for the longest tenure of any House member from Indiana.

A native of Hammond, Mrvan got his bachelor’s degree in journalism from Ball State University. He worked as a pharmaceutical sales representative and a licensed mortgage broker. In 2005, he was appointed as the trustee of North Township, which includes five communities and is the largest of the 11 townships in Lake County. The township is in the northwest corner of the county and includes one-third of its population. Mrvan’s father, also Frank Mrvan, was first elected to the state Senate in 1978 and held the seat, except for four years when he lost reelection. until retiring early in the 2022 session.

McDermott, also a native of Hammond, has served as mayor of the city since 2004. He won the office by defeating the Republican incumbent. His father, Thomas McDermott Sr., earlier served eight years as Hammond mayor and was a Republican. A graduate of Purdue University and the University of Notre Dame Law School, McDermott was endorsed for the House seat by former Indiana Sen. Joe Donnelly and former South Bend Mayor Pete Buttigieg, a presidential candidate in 2020.

On the day Visclosky announced his retirement in November 2019, both Mrvan and McDermott announced their candidacies to succeed him. Mrvan emphasized his skills at bringing people together and his plan to continue his focus on the economy, including projects to assist the local region, the Northwest Indiana Times reported. “You have to be able to work with all communities,” he said.

McDermott, by contrast, criticized the excessive partisanship in Congress, which had become “dysfunctional,” he said. “I want to change the culture in Washington D.C.”  That news story described McDermott as the front-runner, given his earlier plan to challenge Visclosky in the 2020 Democratic primary. “I’m way ahead of the game as far as any other opponents that are going to run against me,” he said.

Four months later, in a packed rally at a United Steelworkers hall, Visclosky announced his support of Mrvan. “I wanted someone who’s a decent person, and he’s a public servant without all the self-aggrandizement,” Visclosky said. The head of the local steelworkers, which is the largest union in the region, said, “We’re going to flex our muscles to win,” the Chicago Tribune reported. In response, McDermott said that Visclosky was trying to control the outcome of the election. “Thankfully, it’s up to the voters, not the political operatives,” he added.

McDermott was the leading spender in the primary, with $630,000, which more than doubled Mrvan’s spending. But Mrvan defeated McDermott, 33%-28%. Of the 10 other candidates, none received more than 10 percent of the vote. “We shocked the world,” Mrvan said when the result became clear. Mrvan ran second in LaPorte and Porter counties but he took 37 percent of the vote in Lake County, which cast nearly four-fifths of the total vote.

In November, Mrvan got 57 percent of the vote against Republican Mark Leyva, a former carpenter and steelworker who lost seven challenges to Visclosky. He took Lake County with 61 percent, but lost Hammond—about one-fourth of the district vote—by less than 700 votes.

In the House, Mrvan joined the Education and Labor Committee, plus Veterans’ Affairs. But arguably the most signficant development for the new congressman during his first term occurred in the Indiana Statehouse as state lawmakers -- among them his 88-year-old father, who would retire from the Senate a few months later -- redrew the lines of the 1st Congressional District in the state's decennial redistricting. Despite concerns that the legislature's Republican supermajorities would pull more Republican voters from adjacent districts into the longtime Democratic stronghold, Mrvan's district remained relatively intact. But as Election Day 2022 approached, his position was nonetheless seen as tenuous due to the unexpected fundraising strength of Republican nominee Jennifer-Ruth Green and continuing demographic shifts in the district, particularly the hollowing out of the city of Gary, long -- but perhaps not forever -- a source of enough votes to propel any Democrat to victory. -- The Almanac of American Politics 2022 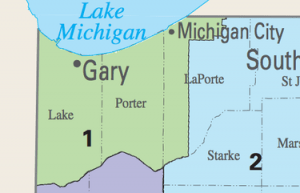