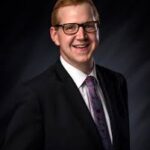 U.S. 31 runs through the heart of House District 23 in north central Indiana. In Miami County, roadside signs show the way to Mexico and Denver, towns just off the four-lane highway; further to the east is the larger city of Peru, the county seat. To the west is the district’s largest city, Logansport in Cass County.  To the north is Rochester, the Fulton County seat where in 2018 a driver sped past a stopped school bus, killing three children – 6-year-old twin brothers and their sister, who was 9 – as they crossed busy State Highway 25 to board it. The tragedy prompted one of the first bills introduced by newly elected state Rep. Ethan Manning, a real estate broker and auctioneer from Denver.

Though still in his mid-20s, Manning already had served a term on the Miami County Council and was Republican county chairman as well. The legislation, later incorporated into a Senate bill, increased penalties for drivers who pass school buses when the stop arm is out. It also required school districts to minimize the number of instances in which children must cross heavily traveled roads. With the victims’ parents looking on, Manning sat alongside Gov. Eric Holcomb as he signed the bill into law.

His predecessor served 13 terms and, when he retired, was second only to the speaker in the House Republican hierarchy. Manning similarly sat on committees and introduced bills reflecting the rural, largely agricultural character of his constituency. He was unsuccessful in a first-year effort to establish a small-school grant program for districts with enrollments under 1,000; the bill didn’t make it out of committee. In 2020, Manning was primary author on a bill requiring the Indiana Department of Natural Resources to identify and remove low head dams that create dangerous currents, impede water flow and alter natural habitat. Described as a danger to humans and fish alike, there are about 150 of the small, manmade structures in Indiana, including many on the Wabash and Eel rivers that run through Manning’s district.

Hillary Clinton narrowly won a Logansport precinct in 2016, but the rest of District 23 went for Donald Trump. Manning was unopposed for the Republican nomination in 2018 and won 2-to-1 over his general election opponent, a Democrat on the Logansport City Council. He was unchallenged both the primary and general elections in 2020. – Kevin Morgan 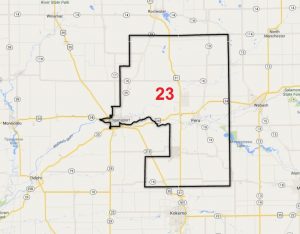