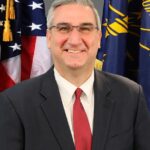 You don’t have to pore over decades of certified vote tallies to get a feel for the electoral history of the Indiana governor’s office. Just think “Hoosier hospitality.”

While proudly hospitable to strangers, Hoosier voters as a whole prefer the company of their immediate family, and particularly in presidential elections since Reconstruction, their political family has tended to be the Republican Party. When it comes to the race for governor, however, Indiana voters have been more open to candidates who don’t share their party affiliation. Indeed, in the 20th century, the governor’s office was occupied by a Democrat for 44 years and by a Republican for 56 years, one election outcome shy of an even split. And since 1972, when the state’s constitution was amended to allow governors to seek reelection, they haven’t ousted an elected incumbent.

The current incumbent is Republican Eric Holcomb, 52, a self-professed political junkie who was sworn into his second term earlier this month. Holcomb has worked in and around government most of his adult life, but, for him, politics is more than a day job. It’s a favorite pastime – right up there his other avocation, basketball. Holcomb has developed an encyclopedic knowledge of political trivia. He has amassed a collection of political memorabilia that features documents bearing the signatures of all 44 U.S. presidents. He even chose to have his bachelor party at the Abraham Lincoln Presidential Library and Museum in Springfield, Ill.

Although his omnipresent cowboy boots scream “Texas,” Holcomb is a lifelong Hoosier. After graduating from Indianapolis’ Pike High School, Holcomb earned a bachelor’s degree in American history from Hanover College, where, appropriately enough, he served two terms as chapter president of his fraternity. He then spent six years as a Navy intelligence officer, primarily in Jacksonville, Florida and Lisbon, Portugal.

Upon his return to civilian life, Holcomb went to work for U.S. Rep. John Hostettler, an uber-conservative Republican whose district encompassed much of southwest Indiana. In doing so, Holcomb embarked on a political career distinguished by an uncanny ability to benefit from developments that, in the moment, appeared to be major setbacks.

In 2000, the congressional staffer ran for a seat in the Indiana House of Representatives. Holcomb failed to dislodge the incumbent, Vincennes Democrat John Frenz, but his campaign gained national attention – for reasons Holcomb would just as soon forget. In the final days of the race, Holcomb ran a newspaper ad accusing Frenz of supporting bestiality and child pornography. The basis for the charge: Frenz had voted for a state budget that included routine funding for Indiana University, home to the world-renowned Kinsey Institute, which has studied human sexuality since 1947.

From 2003 to 2011, Holcomb held various positions in the administration of Gov. Mitch Daniels, taking time off to manage Daniels’ 2008 re-election campaign. Holcomb’s prowess as a political strategist led to a two-year stint as chair of the Indiana Republican Party. He relinquished the post in 2013 to become state chief of staff for U.S. Sen Dan Coats.

Less than two years later, Coats revealed that he wouldn’t seek re-election in 2016. Holcomb would need to look for another job. It didn’t take long for the Senate aide to settle on one that he thought would be a perfect fit: his boss’s job. In March 2015, just two days after Coats announced his retirement, Indiana’s future governor launched a campaign to succeed Coats in the Senate. Although he was the first person to enter what would become a three-way race for the Republican nomination, Holcomb struggled to gain traction. “He couldn’t get arrested in that election,” Robert Dion, a political scientist at the University of Evansville, told Governing magazine. “He was on his way to being a failed candidate again.”

Three months before the primary, trailing his two GOP rivals in fundraising, Holcomb dropped out of the race, saying he had been “called to serve our beloved state in a different capacity.” The next day, Gov. Mike Pence announced that Holcomb would become Indiana’s 51st lieutenant governor, replacing Sue Ellspermann, who had resigned to pursue the presidency of Ivy Tech Community College. At Holcomb’s swearing-in ceremony on March 3, 2016, Pence introduced his new No. 2 as “the best-prepared person to ever assume the duties of lieutenant governor of the state of Indiana.”

Maybe so, but Holcomb couldn’t have been prepared for what came next. In July 2016, just 4½ months into Holcomb’s tenure as lieutenant governor, Trump tapped Pence to be his presidential running mate. Because Indiana law prevents individuals from running for two offices at once, Pence withdrew from the 2016 governor’s race. Holcomb decided to go after the job – with Pence’s blessing and, more importantly, his backing. On July 26, 2016, the Republican State Committee picked Holcomb to replace Pence on the November ballot. Two members of Congress and a state senator also had vied for the honor.

Holcomb had little time to savor his selection. The general election was barely 100 days away, and the Democratic nominee for governor, former Indiana House Speaker John Gregg, had essentially been running for the post since he came within 2.9 percentage points of beating Pence in the 2012 general election. For Holcomb, though, fortune smiled again. Trump, whom many political watchers had dismissed as a joke just a year earlier, ended up carrying Indiana by nearly 20 percentage points, presumably contributing to Holcomb’s much narrower win. The final tally in the governor’s race: Holcomb, 51.4%; Gregg, 45.4%.

“Some call (Holcomb) the staffer who won the lottery,” former state Rep. Mike Murphy, now a Republican political consultant, told Governing. “But he had the best possible training from the best mentors you could have.”

In the years since his election, Holcomb has seemed determined to build a broad base of support, thereby eliminating any dependence upon good fortune or another politician’s lengthy coattails. In contrast to Pence, who pursued an aggressive social agenda, Holcomb has prioritized pragmatism and the effective, efficient delivery of government services. He has identified five overarching goals – or, as he prefers, “five pillars”: cultivate a strong and diverse economy, expand and maintain the state’s transportation and utility infrastructure, develop a skilled workforce, address the opioid epidemic and “deliver great government service.”

Holcomb also has shown a willingness to depart from policies instituted by, or at least endorsed by, his predecessor. Whereas Pence had alienated Democrats (and more than a few Republicans) with his advocacy of Indiana’s so-called Religious Freedom Restoration Act, which critics viewed as a thinly veiled attack on the LGBT community, Holcomb pushed the General Assembly to pass legislation targeting crimes motivated by hatred or bias. Hoping to reduce the spread of infectious diseases, he eased restrictions that Pence had placed on government-operated needle-exchange programs. Holcomb also issued a disaster declaration that cleared the way for a lead-contaminated neighborhood in East Chicago to receive additional government assistance. Pence had denied the community’s request for such as declaration.

At the same time, Holcomb has steered clear of watershed changes in state policy or practice. Perhaps he wants to preserve his political capital, or maybe he senses that Hoosiers already have endured more than enough upheaval courtesy of actions in Washington. Holcomb’s critics complain that he’s not visionary – that his leadership style lends itself to evolution, not revolution. The governor, however, doesn’t seem to mind being portrayed as an incrementalist – a bold incrementalist, anyway. Indeed, most of the administration’s initiatives and legislative agendas have borne monikers that incorporated the phrase “next level,” an indication that, in Holcomb’s mind, the status quo, or at least stability, isn’t altogether bad.

Because of the unusual path he took to the governor’s office, Holcomb was, prior to 2020, one of the least-known state chief executives in the country. Several months of daily COVID-19 briefings – carried live on many of the state’s TV stations – turned Holcomb into one of Indiana’s most familiar figures as he ran for a second term against Democrat Woodrow “Woody” Myers and Libertarian Donald Rainwater.

Holcomb enjoyed a huge fundraising advantage over his opponents. As of Sept. 30, Holcomb had more than $6 million on hand, compared with $80,000 for Myers and $131,000 for Rainwater. (Although Myers sees the COVID-19 pandemic as an issue that plays to his strengths as a physician, it hasn’t done him any favors on the fundraising front. The Indianapolis Star reported that Myers had to cancel at least 15 fundraisers after state officials issued a stay-at-home order in March.)

Most Hoosiers appeared to approve of the governor’s response to the COVID-19 crisis, and most think Indiana is on the right track overall. Perhaps more telling than his lead over Myers and Rainwater – or even the solid approval ratings he receives in most surveys – is Holcomb’s apparent ability to avoid irritating Hoosiers. In poll after poll, the governor’s unfavorable rating is negligible, at least as defined by those who earn a living in public-opinion research.

On Election Night, the polls – at least in the Indiana governor’s race – were on target. Holcomb won with 56.5% of the vote, compared to 32% for Myers and 11% for Rainwater. It was the most lopsided win for a governor since Evan Bayh defeated Linley Pearson in 1992.

Holcomb’s focus on nuts-and-bolts governance and his oft-stated desire to heed the opinions of all Hoosiers – not just Republicans – have drawn praise from individuals across the political spectrum. “I’m not saying he’s not partisan,” Karen Freeman-Wilson, the former Democratic mayor of staunchly Democratic Gary, told Governing magazine in 2019. “But he does not allow the partisanship to get in the way of doing his job and understanding that he should be engaged with people who did not vote for him.”

Indeed, Holcomb’s amiability might have been the key to his re-election. He’s a Republican in a state that skews Republican. He’s an incumbent in a state that has never rejected a governor who was elected in his own right. Finally, he has sought to avoid divisive social issues, inflammatory rhetoric and overtly partisan decisions, which have enabled him to avoid a fierce Democratic backlash. He has been, as Governing put it, nice – and in the absence of an egregious misstep, has yet to overstay his welcome.– Jon Schwantes