The mainline families of Indianapolis once had an informal tradition of service to the state legislature. The Fortunes, the Tarkingtons, the Vonneguts and the Ruckelshauses all sent at least one of their own to the Indiana House of Representatives, serving a term or two and then making way for someone else, usually another Republican from one of the old-money enclaves along or around North Meridian Street. The lines of representation have since been redrawn, legislative tenures have grown longer, and party identification bears little resemblance to that of even the recent past. Since 2009, a Democrat, Ed DeLaney, has represented Meridian-Kessler, Meridian Hills, Butler Tarkington and neighborhoods to the west, winning reelection by increasingly comfortable margins including an uncontested run in 2018; in 2020, he defeated a late Republican entry to the field with 70% of the general election vote. House District 86 remains home to country clubs and prep schools, but its diversity of race and income levels ranks among the highest in the entire legislature.

DeLaney, a Harvard-bred attorney who himself has one of the city’s more recognizable family names, is arguably the chamber’s clearest and most senior voice for those less fortunate. He keeps a busy and high-profile committee schedule. DeLaney’s success in getting his bills passed, however, has been tempered severely by the side of the aisle he finds himself on. As in the Senate, House Democrats remain a superminority limited even in their ability to obstruct the agenda of the other side, let alone pursue their own. DeLaney was sole author on eight bills in 2019, and collectively they were a study in Trump-era progressivism – a $15-per-hour minimum wage, eliminating the Pence-era State Board of Education, increased gun control and safety, grants for refugee assistance, increased access to health care and insurance and a call to investigate a powerful public official accused of sexual misconduct. Like most Democratic proposals in Republican-held chambers, none made it out of committee.

But DeLaney’s effectiveness as a legislator can transcend wins, losses or hierarchy. He’s chosen as often as any in his caucus to take the microphone to present the case for the Democrats, particularly when it involves teacher pay, charter schools, school vouchers, criminal law or LGBT rights. In 2014, DeLaney led the charge against House Joint Resolution 3 (recognizing marriage only between different genders), a key piece of the Pence social agenda that ultimately fell short of passage. In 2019, both in committee and on the House floor, he repeatedly offered amendments to the state budget that called attention to the lack of money dedicated to teacher pay raises; under mounting public pressure, Gov. Eric Holcomb and Republican leadership signaled the 2021 budget would be a different story – and it was, due to an unexpectedly high state surplus fueled by federal coronavirus funds and allowing an unprecedented boost in K-12 spending and teacher pay.

In 2021, DeLaney was one of the most impassioned voices in his caucus in opposing the decennial redistricting process led by the Republican supermajority, warning that it would lock in one-party rule for at least another decade and make his caucus all but irrelevant: "You never need us,'' he said from the floor to the Republican side of the aisle, "and as long as that happens, our contribution is diminished.”  Republicans hold a 71-29 advantage, and DeLaney’s side of the aisle appears destined to remain the minority going into 2023 -- though it appears likely he'll be there for as long as he chooses. – Kevin Morgan 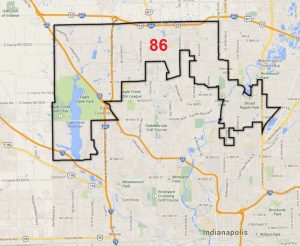