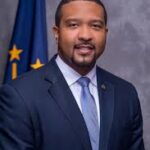 Though less than half of what it once was, the city of Gary still accounts for most of Senate District 3. For more than 25 years, it was represented by Earline Rogers, a Democrat who in the early 1990s worked with a Republican majority to pass the legislation that brought two riverboat casinos to the Gary lakefront. Gaming brought jobs and tourism to the city but fell short of transforming its economy; in 2019, a legislative overhaul of gaming in Indiana included the consolidation of the two casinos into one that will be land-based and closer to I-94. Virtually nothing in Gary has been left untouched by its well-documented economic decline. The state took over the city’s failing schools in 2011 and only recently returned one to local control.

Rogers served into her 80s and upon retiring in 2016 was succeeded by Eddie Melton, a soft-spoken utility executive who also has shown a knack for getting results by working across the aisle. Outside Gary, he was best known as a Pence administration Democratic appointee to the State Board of Education.

Upon arrival in the Senate, schools were Melton’s focus. Elected to a Democratic minority even more outnumbered than it was in Rogers’ day, Melton stepped forward during his first session to be second author on then-Appropriations Chairman Luke Kenley’s bill that provided state financial assistance to – along with increased state control over – struggling schools in Muncie and Gary. Melton was among those credited with adding compromise language that preserved some local input in decision-making.

In 2020, working with Kenley’s successor, Melton was the primary author on Senate Bill 416, which restructures Gary schools’ debt to free up to $43 million for capital improvements; the bill passed the Senate unanimously. His most bipartisan moment came in a 2019 “listening tour” with Republican state schools Superintendent Jennifer McCormick, leading to speculation that she would be his running mate in a 2020 gubernatorial campaign.

Melton announced in October 2019 that he would seek the Democratic nomination to run against Gov. Eric Holcomb but bowed out three months later, citing difficulties with fundraising and the need to focus on his legislative duties as well as running for a second term – which wasn’t a tall order; Republicans no longer contest the district. The more pressing question is how long Melton will be content to remain in the state Senate superminority, which appears locked in for the foreseeable future. — Kevin Morgan