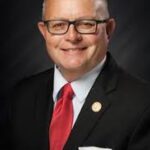 Elkhart took center stage during the Obama administration as the president travelled to northern Indiana to highlight the city’s stimulus-assisted efforts at renewal during the Great Recession and later its economic recovery. News coverage highlighted Elkhart’s station as RV Capital of the World – more than 80% of recreational vehicles in the U.S. are manufactured in and around the city – which remains the linchpin of its economy and a priority of its representatives in the Indiana General Assembly. Indiana House District 48, which extends south from the Michigan state line to include most of Elkhart and surrounding Elkhart County, has been represented since 2014 by Republican Doug Miller. A homebuilder who has served on local planning and zoning boards, Miller said he ran for public office in hopes of ensuring that his grandchildren wouldn’t need to leave northern Indiana for better employment opportunities.

In his first legislative session, Miller co-authored legislation to exempt the state sales tax on RV purchases by out-of-state buyers. The area’s legislative delegation has pointed out that some states, including nearby Michigan, do not have reciprocity agreements with Indiana, and as a result buyers from those states face a second round of taxation back home; due to the competitive disadvantage, they said, some RV dealers were leaving Elkhart.  A required fiscal analysis by the nonpartisan Legislative Services Agency determined that the resulting loss to the state would be significant though impossible to calculate precisely; the bill did not advance beyond the House Ways and Means Committee. Miller was a House sponsor of a 2017 Senate bill which was passed and signed into law, suspending the sales tax on out-of-state purchases for two years, resulting in a revenue loss that LSA deemed less significant. In 2020, he authored a bill, passed and signed into law, which extended the exemption for another five years.

Also in 2020, Miller authored a bill which drew attention to the Lake Michigan community of Long Beach, shore more than 60 miles from his home district. It proposed that the state cede ownership of shoreline property to those adjacent property owners with deeds stating that their ownership extends to the lake; the bill also would have limited public use of the shoreline. Miller said he was trying to resolve confusion that resulted from a 2018 decision by the U.S. Supreme Court which largely favored the property owners, adding that the public could use other beaches nearby. The bill made it through a House committee but did not advance to a final vote on the floor. He was among a majority of House Republicans who tried unsuccessfully to remove rape and incest as exceptions to the 2022 abortion ban; he voted for the ban with the exceptions intact on its final passage.

The district, in varying configurations, has elected Republicans since the 1990s. Miller was unchallenged when he won election in 2014, and has won over Democratic and Libertarian opponents with two-thirds or more of the vote in the general elections since. – Kevin Morgan 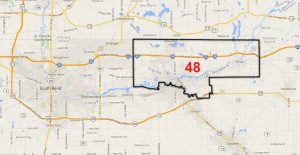