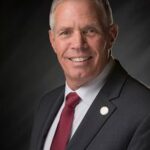 David Abbott has served in Indiana elective office consecutively for more than 34 years, stretching back to the Republican Reagan heyday. The 68-year-old’s first 30 years of service were at the grassroots level — 27 years as a Rome City town council member, followed by three years as a Noble County commissioner.

Then in spring 2018, the GOP tapped Abbott to finish out the last few months of the term of Rep. David Ober, who accepted a gubernatorial appointment to the Indiana Utility Regulatory Commission. Abbott subsequently ran for the office that November and was elected to his first term.

Until the 2021 redisticting, Abbott represented District 82, which encompassed all of Noble County and parts of LaGrange, Elkhart and Allen counties and in that configuration did not elect a Democrat in 30  years. Abbott ran unopposed in 2020 after the death of the Libertarian nominee in the district a week shy of his 22nd birthday. As a result of the redistricting, Abbott's residence was redrawn into House District 18; he is unopposed in the 2022 primary and general elections.

Abbott’s legislative record shows that you can take the boy out of the small town, but not the small town out of the boy. (He’s among one of 1,400 Rome City residents.) Abbott has authored, co-authored and supported bills that demonstrate his commitment to grassroots public servants and services.

For example, he authored a bill renaming 911 police dispatchers as 911 first responders that became law July 1. They had been classified as office workers, and Abbott declared they needed more respect. Afterall, the career requires fast, reasoned thinking and firm, calm directions. These new first responders stick with the crisis until emergency help arrives, then immediately answer another call for help. It’s a taxing, stressful job, and those in the field have suffered from PTSD and other health issues. Advocates for the change hope that the federal government will take notice and offer these new first responders better mental health care. Abbott said they deserve higher salaries too, but he couldn’t address that in a non-budget short session.

Local school officials and city/county leaders will be in better communication, given another bill that became law after Abbott introduced it. A school district leader must be among those appointed to county redevelopment commissions. The law also requires school districts to present their proposed annual budgets to local taxing district representatives.

After being appointed vice chair of the House Government and Regulatory Reform Committee in fall 2019, Abbott sounded like many Republican leaders who boast of their commitment to streamlining state government and cutting red tape.

But he also bucks past Republican-led regulated education reforms that led to rigid school district and teacher evaluations during the last decade. Abbott suggested that fewer school regulations could free up money to boost teacher salaries.

And in at least one situation, his opinions mirror what teacher unions have been saying for years. The grandfather of 13 is incredulous that teachers are held accountable for making sure all students reach grade-level standards—even if those children are hungry or neglected.

“To me that doesn’t give a reflection of how that teacher truly performs,” he said in a Jan. 24 interview. with Jon Schwantes, host of the PBS broadcast Indiana Lawmakers. “Why would we tie that to them in this day and age?”

In his first elected term, Abbott plunged beyond local government needs to address natural resources but had limited success. Given Noble County’s 115 lakes, he saw a need to quash wake boating, which can capsize other boats, cause injuries, and damage docks and shorelines. But the bill drowned without a hearing. He authored another bill designed to prevent the abuse of confined wild animals that died without a vote following a committee hearing.

However, one water-safety bill, authored by Rep. Ethan Manning, R-Denver, and co-authored by Abbott and two others, did become law July 1. It requires the Department of Natural Resources to create a roster of treacherous low-head dams, to identify their owners, and to encourage them to remove or alter the dams to make the waters safe.  In the last decade 25 people in Indiana have died at or near low-head dams.

Another tragedy—intensely personal for Abbott and his family—led him to introduce legislation to honor military men and women who die in service—a comfort to grieving families who made the ultimate sacrifice and worry their children will be forgotten. Abbott’s 20-year-old son died in Army combat in Iraq in 2007. The new law suggests that state and other government agencies fly a special flag designed for the military’s fallen, the Honor and Remember flag, during the month of May each year.  – Kathleen Schuckel 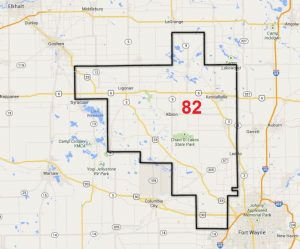