Skirting the eastern edge of Evansville, Indiana House District 75 extends north from the Ohio River through suburban Warrick and more rural Spencer and Pike counties. It was represented for a decade by Republican Ron Bacon, a respiratory therapist who previously had served as Warrick County coroner and on the county council as well. As the 2020 legislative session was about to begin, Bacon announced that he would be retiring from the Indiana General Assembly at the end of his fifth term to return to the Warrick County Council.

A few weeks after Bacon’s announcement, Rick Martin, a former chairman of the Warrick County Republican Party, announced his candidacy to succeed him; barely a day after Martin’s announcement, he was arrested for drunken driving, effectively ending his candidacy. The current party chairman, Mike Griffin, later announced that Bacon had encouraged him to run to succeed him and entered the primary just ahead of the filing deadline. But it was another candidate who won the primary and the Republican nomination: Cindy Ledbetter, a Warrick County Council member who works as a nurse practitioner specializing in mental health issues. She said her experience on the council had shown her the disconnect between state and local government, and the need to remedy it. Ledbetter won election by about the same margin that Bacon received in 2018, defeating her Democratic opponent with 61% of the vote.

Toward the end of a relatively quiet first term, Ledbetter rose to speak from the House floor during the 2022 special session that enacted a near-total ban on abortion in the wake of the overturning of Roe v. Wade. She shared her story of growing up poor, an unplanned pregnancy and lacking access to health services -- access, she said, which remains unavailable for many women who would be denied abortion rights under the legislation -- and concluded, "I cannot, in good conscience, support this bill.'' Ledbetter's was one of nine House Republican votes against Senate Bill 1.  --  Kevin Morgan 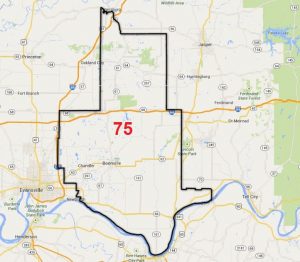