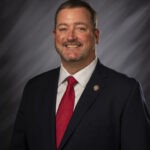 Indiana House District 29 covers all of Noblesville and Wayne Township and parts of Fall Creek and White River Townships in Hamilton County. It has been represented since 2018 by Republican Chuck Goodrich.

Early in 2019, during his first term as a state representative, Goodrich introduced a bill to create an intergenerational pilot project at schools which was embraced by both Republicans and Democrats. In place through July 1, 2021, the law matches older adults as mentors with students struggling in school.

The following year, Goodrich gathered political foes together again to pass a law to help low-income students accept paid apprenticeships and internships without reducing their family’s public assistance benefits. He and other legislators had heard from families who lost food stamps and other government support because their child’s apprenticeship pay pushed their combined income too high.

Goodrich’s concern for students is not just personal. As president and CEO of Gaylor Electric, he’s long offered internships to high school students to give them a head start in life.

“Attracting the right talent to our company is a top priority,” Goodrich explained in a 2014 conversation with Bill Stanczykiewicz, president and CEO of the Indiana Youth Institute. “Our interns can come out of high school, go into an apprenticeship program, go right to work, further their education in trade school, earn an associate degree and continue. And it’s all paid by us.”

More recently, Goodrich helped establish an alternative, state-accredited high school for at-risk students at his company’s Noblesville hub, the Gaylor Electric Crossing School of Business and Entrepreneurship satellite campus. “In combination with classroom curriculum, our students also receive hands-on training in our fabrication shop,” Goodrich said. “At time of graduation, these young individuals leave with a wealth of construction knowledge that readies them for a future career.”

He grew up in Roann, a  north-central town with only a few hundred residents, and graduated from Manchester High School in a class of 100, then chose Vincennes University for his associate degree in architectural drafting. He tried land surveying work, then enrolled in Purdue University, first in civil engineering, then in the building construction management program, from which he earned a bachelor’s in 1993.

Along the way, he had an internship with Gaylor Electric in 1991, landing the opportunity after meeting company founder John Gaylor at a golf outing with the Purdue student chapter of the Associated Builders and Contractors (ABC). He left town after graduation to work as a project engineer for hospital projects in Florida and South Carolina but returned to Gaylor in 1996 and advanced up the leadership ladder.

Goodrich credits Gaylor as well as his cousin, J.R. Gaylor -- the president of the Indiana/Kentucky chapter of ABC who launched an unsuccessful bid for the Republican nomination in Noblesville-based Senate District 20 -- with his success.

“J.R. has been my mentor and an absolute rock. He has engaged me and prepared me for leadership roles. Without him, I wouldn’t be here,” he said in an article in Construction Executive, a business publication.

Goodrich and his wife, Tricia, who married in 1993, settled in Noblesville, where they raised their four children. When Goodrich won his state legislative seat two years ago, he was already experienced in teamwork and leadership at private and public organizations, including ABC chairman of the board, Boy Scouts of Central Indiana, Noblesville Youth Association Program and the Indiana Department of Workforce Development.

Despite his bipartisanship skills, Goodrich is largely conservative, as evidenced by his proud display of Republican presidential portraits on his office walls. He believes in alternatives to traditional public schools and facilitated Gaylor’s partnership with The Crossing, a private school consortium for at-risk youth that encourages students to embrace “faith-based character education” alongside job training.

Goodrich also is strongly anti-union, dubbing himself a “freedom fighter” for merit-based corporations. His long association with ABC cements that commitment, for only non-union shops are members.

“The merit shop philosophy means freedom: the right to be successful and the right to fail; the right to build a business, create jobs and take hold of the American dream. It’s common sense,” Goodrich said in Constructive Executive. – Kathleen Schuckel